By Anirudh Agarwal on March 27, 2014 in Muscular System

It is the more superficial of the two lateral muscles of the lower leg. The long, strap-like structure is also called fibularis longus. The term Peroneus is derived from a Greek word called “Perone” referring to pin of a buckle. Simply put, it relates to the fibula of the leg.

The evertor muscle emerges from the head and upper two-thirds of the lateral shaft of the fibula. The deep surface of the fascia and the intermuscular septa also give rise to this single strap of tissue. It inserts deep into the plantar aspect of base of the first metatarsal and medial cuneiform to the long plantar ligament. In rare cases, the second metatarsal bone is involved.

On the outside of the lower leg, fibularis longus connects the tibia and the bones of the fibula to the foot by a small tendon. 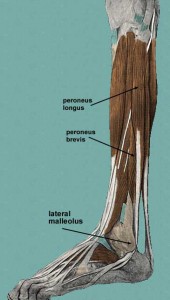 The lateral muscle of the leg is interspersed by fibers from the lateral condyle of the tibia. The common fibular nerve passes to the exterior portion of the leg through a gap in order to innervate the muscle. Behind the lateral malleolus, a network of nerves and muscles around the ankle, fibularis longus attaches to the long tendon of the fibularis brevis in a common groove. The superior fibular retinaculum and its tendons encased in a mucous membrane transform the channel into a wide furrow. Diagonally, the tendon crosses the lateral side of the calcaneus, the trochlear process, and the fibular brevis tendon, exactly below the inferior fibular retinaculum. The lateral region of the cuboid is cut across by the muscle strap that extends up to the bone in a groove turned into a canal by the long plantar ligament. Once the muscle passes the sole of the foot, it undergoes insertion as mentioned earlier.

The movement of the dorsi-flexors of the foot, tibialis anterior and fibularis tertius, is counteracted by the evertor muscle and brevis muscles along with the tibialis posterior by plantar stretching the foot, meaning moving downward. The muscle enables the foot to turn inside out. It also supports the arch of the foot by obliquely crossing the sole of the foot. In this way, the leg remains stable upon the foot. The superficial muscle is able to bear weight on the leg by pulling its lateral side.

A sudden rupture of the lateral tendon can cause severe injury and pain. Laceration and dislocation are some of the other acute injuries of the muscle. Tendonitis, inflammation of the tendon, is common in sports injuries. Affected patients experience discomfort and stiffness in the joints. 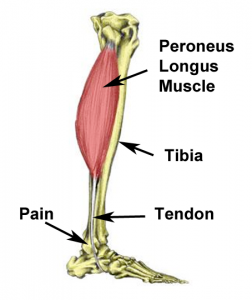 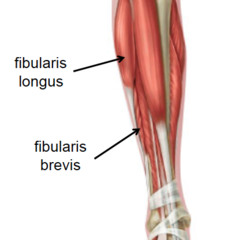