By Shoummojit Roy on January 17, 2013 in Cardiovascular System

It refers to a muscular sac or pouch joined to the left atrium of the cardiac chambers. It is sometimes also called the ‘left auricle’ although the latter term was originally used to describe the left atrium. It is abbreviated as LAA.

LAA appears as a windsock in appearance. It is proximal to the unfastened wall of the cardiac chamber known as the left ventricle.

It acts as a reservoir for the left atrium of the heart. A major endocrine organ, it mainly produces ANP (Atrial Natriuretic Peptide) supply inside the heart. It also helps mediate thirst and people without the structure are found to get thirsty and stand at a greater risk of being dehydrated.

During operative treatment, it can be used for mitral valve surgery. Occlusion of this structure can be used as an experimental curative method to avoid the risks of stroke in atrial fibrillation.

These images would prove useful to you in understanding the visual appearance of this cardiac structure. 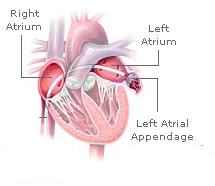 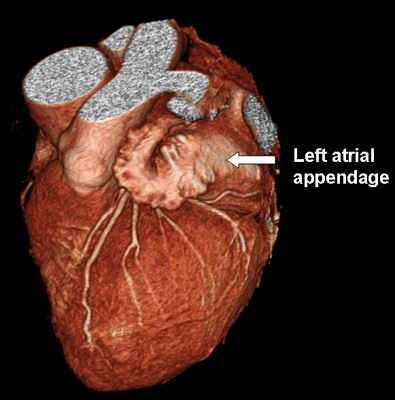