By Shoummojit Roy on June 9, 2012 in Respiratory System

It refers to very small end ducts of the ramifying airways inside the lungs. There are approximately 1.5-2 million such structures within each lung of a person. These are also often known as the final branches of the human bronchial tree.

As aforementioned, these are located inside the lungs. These are found beyond the respiratory bronchioles. These are formed by a series of alveoli lying next to each other.

The functions have been jotted down in short:

The alveolar ducts and alveoli serve to be the sites that are involved in several infections. They may cause Pneumonia. These structures are present on the parenchyma of the lungs and hence they show huge involvement in the blockage of a pulmonary artery, which is referred to as pulmonary embolism.

There is a capillary bed that surrounds the alveoli. This bed is prone to get damaged and thereby lead to the leakage of fluid via alveolar capillaries. As a result, the fluid gets accumulated in the lungs, which causes pulmonary edema. Another condition that marks the damage of the capillary bed is acute respiratory distress syndrome.

Take a look at these useful images to know how this respiratory duct appears under a microscope. 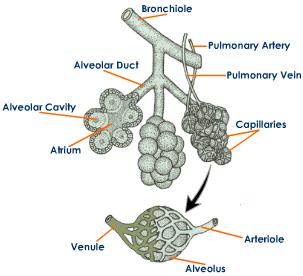 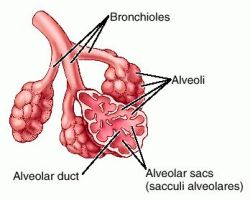