By Shoummojit Roy on May 22, 2012 in Female Reproductive System

It is a major uterine ligament of the human body. The female body contains a pair of these structures. It is part of a visceral pelvic fascial thickening.

It is also known by many different names like

The structure is situated at the root of the broad uterine ligament. It runs externally continuous with the fibrous tissue that envelops the pelvic blood vessels.

Arising from the lateral pelvic wall, the cardinal ligaments adhere to the vagina as well as the lateral cervix.

Measuring around 10cm in length, the cardinal ligaments can be further subdivided into following three regions:

A distal or cervical section has an average length of 2.1 cm long. It is attached to the lateral sides of the cervical area and posteriorly, it is continuous uterosacral ligament’s attachment and hence forms the cardinal–uterosacral confluence [CUSC]. It lacks any significant vascular or neural component with ureter in the intermediate region and therefore safe for surgical use.

An intermediate section is on an average 3.4 cm long. Extending laterally and slightly posteriorly from the cervix is the proximal or pelvic section. It is relatively thick and appears triangular-shaped on cross-section. The average length is 4.6 cm long, this region is attached to the lateral sides of pelvic’s sidewall having its apical area at corresponding to the first branching of the internal iliac artery.

Further, the cardinal ligament can also be divided into a vascular or cranial and a neural or caudal region. This neural/caudal area encompasses parasympathetic nerve fibres that are spread across the rectum and bladder.

It is primarily responsible for making a connection between the cervix and the lateral pelvic wall, which is located at the ischial spine. It supports the uterus, vagina, and cervix.

The structure lies close to the ureters. Due to this reason, it might suffer damage during ligation.

During a radical hysterectomy, it is essential to remove this ligament through surgical means. This is because the ligament consists of the vascular system that caters to the uterus. There is a high prevalence of presence of cancerous cells in this structure. Due to this, removal of this ligament is highly necessary.

The cardinal ligaments along with other ligaments are vital for supporting and maintaining the uterine position within the pelvic cavity of the female body. Any deviation or distortion of these ligaments can result in the development of a pathological condition that can impact the health and wellbeing of a woman. Some of the conditions include the following:

Weak or damaged uterine ligaments and/or pelvic muscles can lead to a complication known as a Prolapse. This involves the uterus literally falling inside/through thevagina, either partially or completely. This is avoided through the action of the pelvic floor muscles and the ligaments of the uterus which keeps it anteverted and anteflexed. This is the most common position of the uterus.

Application of tissue fixation system (TFS) minisling at the location of these organs facilitates longer term cure even if it is a 3rd or 4th-degree prolapse. Symptoms including pelvic pain, bowel incontinence, abnormal bladder emptying, and nocturia can also be treated.

Check these useful pictures to get a glimpse of this structure. 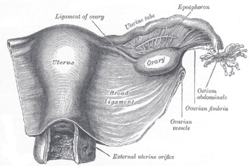