It is the part of the duodenum that is closest to the stomach.

This duodenal structure is about 5 cms long. It is round in shape and has a smoother surface than the other parts of the duodenum that comprise of villi (tiny hair-like mucosal projections), as well as various folds.

It stretches from the pyrolus to the neck of the gallbladder. It is the foremost section of the duodenum. It is situated at a position superior to the pancreatic head and anterior to the gallbladder and the liver. The portal vein, common bile duct, and gastroduodenal artery lie posterior to it.

It is an important part of the intestine and plays a vital role in digestion. Its primary function is to make the digestive process easier by connecting the jejunum to the stomach. Activation of pyloric sphincter, a smooth muscle ring located at the base of the stomach, by hormones causes the food to enter into the duodenal bulb from the stomach. The duodenal bulb, along with the pancreas and the gallbladder, is responsible for the digestive process. Food particles, on passing to this structure, continue to move to the jejunum.

This organ can be impacted due to various disorders, such as duodenal ulcer which develops due to acid.

Mucous lining present in stomach and intestine formed by the cells to protect themselves against the action of hydrochloric acid gets eroded causing a sore or an ulcer. Infection caused by the bacterium Helicobacter pylori is a primary cause of peptic ulcers as the bacterium can bring about inflammation of the mucosal lining and thus result in an ulcer.

Intake of certain medications, especially anti-inflammatory drugs like aspirin and ibuprofen are also known to cause a duodenal ulcer. Some of the other not so common causes of ulcers include stress, smoking, and alcohol intake. Symptoms of duodenal ulcer are as follows:

The ulcer can also cause serious complications like sharp stomach ache, bloody or black vomit or stools. Some of the diagnostic methods used for identifying ulcers include:

If H pylori is the cause of the ulcer, then the usual treatment protocol is ‘triple therapy’. It involves the use of two types of antibiotics for treating bacterial infection and one medication for decreasing the acidic amount produced in the stomach. Limiting the use of anti-inflammatory drugs and alcohol, quitting smoking, and taking antacids will aid in treating the ulcer.

Some other common conditions affecting this structure are:

Swelling of the stomach lining and resultant occurrence of small bulges leads to the formation of duodenal polyps. These polyps are asymptomatic and don’t impact the functioning of the stomach when they are small in size. However, when they increase in size and number patients may experience stomachache and discomfort.

Further, the abdomen becomes harder and sensitive to touch and people might vomit or experience pain, bloating, indigestion, belching, bleeding or appetite change. As the lesions continue to become hard, the stools get dark or tarry in colour indicating an internal bleeding caused by the ulcerated polyps of the stomach.

The initial line of treatment for these polyps involves the use of antibiotics as it restricts and stops the growth of the polyps. In case the condition doesn’t improve and if they are affecting the health adversely surgery is recommended.

A relatively uncommon form of cancer, duodenal cancer is prevalent less than 1% when compared to other cancers. This type of cancer affects primarily the periampullary and ampullary regions close to the duodenum. In most cases, duodenal cancer can be easily identified at early stages as they are easily recognized by the lymph nodes and other adjacent structures. The duodenal tumours are formed by pre-existing adenomatous polyps.

The symptoms of cancer include epigastric pain, nausea, weight loss, or vomiting. Most patients have poor prognosis which may decrease the survival rates by 5 years, varying from 20%-40%. In advanced stages, the cancer is present in ulcerated or polyploidy condition or ringed lesions and can be diagnosed by endoscopy or radiography.

The occurrence of a duodenal hernia is found to be rare.

The organ might also be affected due to Duodenal Switch Surgery. A condition called Nodular Duodenitis also often affects this bulb-like structure and is caused by an inflammation of the same.

In the case of Duodenal ulcers, the structure might also suffer from various deformities.

Know about the visual appearance of this organ with the help of these useful pictures. 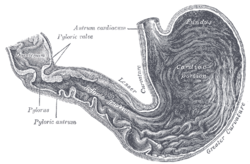 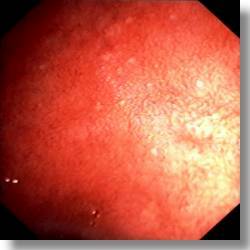