By Anirudh Agarwal on August 14, 2017 in Digestive System

It is one of the 3 parts of the small intestine. The middle segment between the duodenum and the ileum is known as jejunum, found in all upper-level vertebrates like birds, reptiles, mammals including human.

Although the jejunum is anatomically well distinguished from the duodenum by the duodenojejunal flexure, such anatomically distinguishing structure is absent in between the jejunum and ileum. A jejunum is around 2.5 meter in length, which counts for about 2/5th of the complete small intestine (6.5-7.5 meter long). Many parallels running circular folds can be observed in the mucosa known as valves of Kerckring. It is attached to the posterior wall of the abdomen with the help of the membranous fold called mesentery (a double layer of peritoneum) which ensures the flexibility of the entire small intestine to be fitted in the abdominal cavity although it is tightly ‘framed’ by a colon. 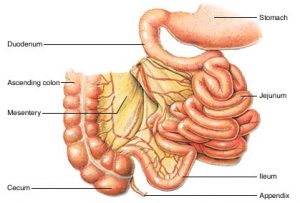 The histology of the jejunum is typical of the whole small intestine- mucosa, submucosa, muscularis and finally serosa. Simple columnar epithelium called laminar epithelialis lines the mucosa towards the lumen. The lumen are house to enterocytes (absorbs water and electrolytes), goblet cells (secretes mucus), enteroendocrine glands (secretes hormones) along with tuft cells, paneth cells, and stem cells. The intestinal gland known as Crypts of Lieberkühn and the finger-like projection called microvilli are the characteristic structures of the small intestine and hence the jejunum.

The superior mesenteric plexus and the coeliac plexus carries out the sympathetic innervation while the parasympathetic work is carried out by the vagus nerve or the 10th cranial nerve.

Some of the most important functions of jejunum are:

Digestion of nutrients like protein by proteinase, starch by amylase etc. Most of the foods especially lipophilic nutrients are absorbed by the jejunum with the help of the microvilli. E.g. – proteins, cholesterol, fats and also the vitamins soluble in fats- A, D, E, and K. About 6/8 liters of water per day i.e., about 90% of the consumed is absorbed by the jejunum by controlling the osmotic gradient which leads to the paracellular transport of carbohydrates, electrolytes, and amino acids.

How long is the jejunum? 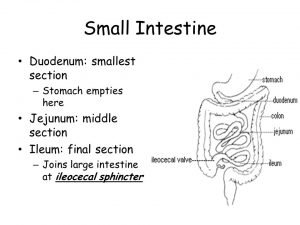 Difference Between Duodenum, Jejunum and Ileum 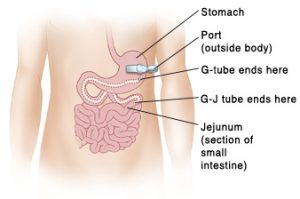 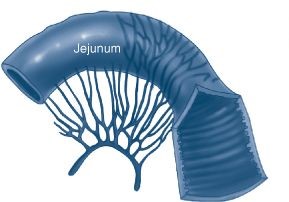 This disease can easily be diagnosed by a CT scan or a double-balloon enteroscopy.

This is still an incurable disease to the dismay of medical science. But treatment at preliminary stage includes medication like aminosalicylates, corticosteroids and immunomodulatory. At a very severe stage removal of the affected part of the jejunum can give partial relief from the symptoms but the disease will return in future to another part of the GI tract. However, the severity of the disease can be controlled by a properly balanced diet from the nutritionist.

This is actually a form of a hernia where there is the formation of small mucosal sac-like structures through the weak points of the jejunum.

Although not proved it is believed to be caused by abnormal peristalsis, intestinal dyskinesia, and high segmental intraluminal pressures.

The symptoms of jejunal diverticulosis includes

The disease can be diagnosed by colonoscopy or barium enema X-Ray study.

The main aim is to minimize the symptoms. A high-fiber diet along with fiber supplements like methylcellulose and psyllium are must for fighting the lesions. The pain and bloating can be reduced by medicines like mesalazine. If the disease goes to the severity of bleeding then consult immediately with medicine practitioner, a surgeon will generally go for jejunal resection.

It is the clinical condition when the jejunum and hence the whole small intestine gets temporarily paralyzed.

Most common causes include

The symptoms of paralytic ileus are as follows

The disease can be identified by abdominal ultrasounds and abdominal X-Ray.

The individual must be admitted to the emergency ward and the bowel must be cleared by tubes first followed by giving intravenous food supply and intravenous fluid supply. Potassium may also help in fast recovery

The etiology of the disease is the immune reaction to excessive consumption of gluten, a protein found in wheat, barley, and rice.

Symptoms are generally very vague and mimic any other abdominal disease.

It can be diagnosed by any serological test. Although the most common test is the tTG and IgA test. If the test shows a positive result, the diagnosis can be confirmed by a biopsy of the small intestine.

The jejunum is one of the most important parts of the body since it absorbs most of the nutrients. Although the diseases talked about cannot be prevented, but the severity of the diseases can easily be controlled.