By Anirudh Agarwal on April 23, 2018 in Digestive System

The digestive system is involved in the breakdown of complex food into smaller absorbable form. The ultimate fate of the food we eat is cellular respiration. The form in which the food is present is not absorbable by the cells. That is why digestive system breaks them into their ultimate product, which is diffusible through the cell membrane.

The small intestine is a highly coiled tubular structure that forms the end site of digestion. It is the most important part of the alimentary canal and leads to the large intestine. Sometimes, this organ is also called ‘small bowel’.

The ‘small’ term is added because it is shorter in diameter as compared to the large intestine.

Where is the Small Intestine located?

The small intestine sits in the lower abdominal region. The tubular structure starts from the pylorus sphincter of the stomach. It then coils around itself and leads to the opening of the large intestine, caecum. It covers most part of the middle and the lower section of the abdomen. 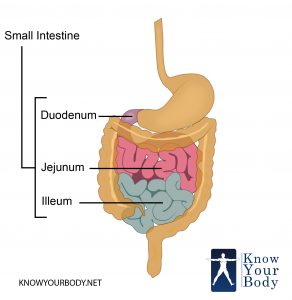 At the junction point, there is a small pouch-like structure called the vermiform appendix. This is a vestigial organ in human beings and hence it is functionless.

Parts of the Small Intestine

The small intestine is divided into three major parts, each characterized by its function and length.

The parts of the small intestine are:

The starting part of the intestine is known as the duodenum.

Duodenum leads to the middle and small length jejunum.

The jejunum is followed by the longest and the most coiled part of the intestine, the ileum.

Ileum leads to the large intestine through caecum.

How long is the small intestine?

The small intestine is exceptionally large, ranging 3-5 meter in length in humans. However, the length varies from person to person. More the height of the person more will be the length of the intestine.

The approximate diameter of the coiled structure is around 1.5 centimeter. However, this length can increase in case of dilation of the bowel.

Structure of the Small Intestine

The surface area of the small intestine is largely increased because of:

Structure of the jejunum

Structure of the ileum

There are four layers of the small intestinal wall, each different in the three parts of the intestine. The four layers are:

The small intestine is not concerned with only digestion. Rather it shows various functions that include:

Duodenum and ileum are the two sites of digestion.

The absorption of the digested products is done through the finger-like micro-projections, villi. The inner mucosa membrane is convoluted in folds that increase the surface area for the absorption. Half of the absorption occurs in jejunum and the leftover products are done in the ileum.

Innervations of the Small Intestine 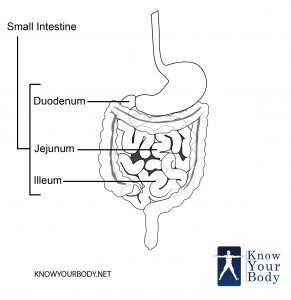 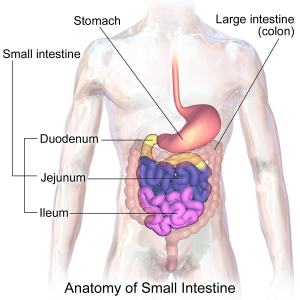 A number of clinical conditions harm the small intestine. Starting from physical obstruction of the lumen to bacterial or viral symptoms, there are many complex disorders.

This is a clinical condition which is characterized by the improper absorption of nutrients by the small intestine. It can occur due to a number of reasons and one should consult a doctor for the further diagnosis.

What is gastroesophageal reflux?

Gastroesophageal reflux is a condition where the oesophageal sphincter muscle does not close properly and the food is pushed back into the esophagus along with the gastric juice.

What do you mean by celiac disease?

Celiac or gluten allergy is a condition where the protein called gluten triggers the immune response of the body. The immunological cells attack the small intestine, thereby causing pain, discomfort, and malabsorption.

Endoscopy is a method of diagnosis where a small diameter pipe is inserted through the pharynx into the alimentary canal. There is a small camera fitted onto its mouth so that the doctors can have a view about the conditions of the internal layers of the organ.