By Anirudh Agarwal on May 1, 2018 in Digestive System

The end part of the human digestive system is the large intestine. No digestion occurs in this organ but it certainly does play an important role in removing the undigested food particle.

This sole organ covers up one-fifth of the length of the entire alimentary canal.

Parts of the Large Intestine 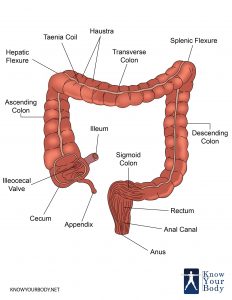 The large intestine is divided into four parts that form the entire length of the intestine.

The colon, however, has three parts depending upon the concerned position. They are:

The large intestinal wall is made up of four layers.

The function of the large intestine is not only limited to the formation of feces. Rather it covers a huge arena of functionality.

The undigested food should not stay for too little time or too long time within the colon. The former will cause less or minimal absorption of water and hence will lead to diarrhea. The later will cause excess water absorption and hence constipation.

Like the small intestine and the rest of the gut, the sympathetic and parasympathetic nervous system triggers the neurogenic working of the large intestine. 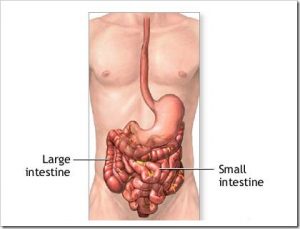 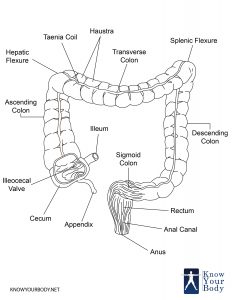 The colon diseases mainly affect large intestine. Other than that, there are certain specific disorders that affect a certain area of the entire column of the large intestine.

How Long is the Large Intestine?

The long intestine is about 1.5 meters (5 feet) long in length.

Haemorrhoids is a disease of the anus where the blood vessels lining the opening swell up and starts bleeding. The bleeding appears in the stood of the person.

What is a colon polyp?

Polyps are small clusters of cells that grow on the inner wall of the colon. Under most of the circumstances, the colon polyps are benign but some of them might turn cancerous.

The reasons for the colon cancer are not properly known. However, scientists have jotted down certain reasons like the aging of an individual, appearance of colon polyps, ulcerative colitis, etc.

How common is colon cancer?

Colon cancer is quite common in both the genders as people are likely to develop the cancerous cells in their colon.