By Anirudh Agarwal on September 2, 2017 in Digestive System

The human stomach bag has five layers, out of which the outer most layer is the Serosa. The serosa makes up the peritoneal membrane of the abdominal cavity. The parietal portion of the peritoneum has an extended flap of tissue that hangs from it called the Greater Omentum.

What is the Greater Omentum?

The greater omentum is a double layer of peritoneum which mainly consists of fat, connective tissue, and lymphatic cells. It descends from the greater stomach curvature and folds under itself and then connects to the transverse colon. It is the largest peritoneal fold and is well vascularized consisting of gastroepiploic arteries and draining veins. It is translucent in nature and partially fragmented also.

The greater omentum extends from the greater curvature of the stomach. It drapes over the small intestinal coils in an apron like manner and goes back to reach the transverse colon. 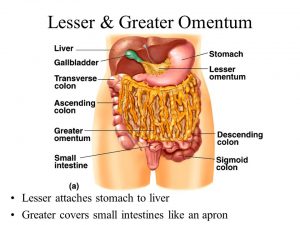 Composition of the Greater Omentum

The greater omentum is largely composed of fatty adipose tissue. The quantity of adipose tissue varies from individual to individual. It also has cellular and lymphatic tissues and blood vessels.

Anatomy of the Greater Omentum

The greater omentum is made of four layers, two of which are anterior layers and two are posterior layers. On the left, it is attached to the gastrosplenic ligament. On the right, it extends to the proximal duodenum.

The omentum has three major vessels that originate from the gastroepiploic artery. These are the right, the middle and the left omental artery. These arteries have smaller branches and there are also draining veins present. The right and left gastroepiploic arteries provide the vascular supply through the anastomosis. The lymphatic vessels help remove the waste materials and toxins.

Functions of the Greater Omentum

Some of the major functions of the Greater Omentum are to deposit fats, limit infections, delivery of WBC to fight infections in certain regions, contributes to the immune system and it is also used as a grafting material.

The greater omentum has many functions. They are: 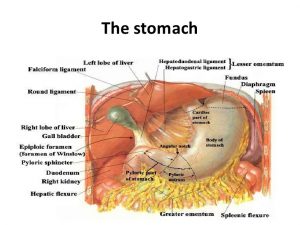 Diseases associated with the Greater Omentum

The greater omentum has a few diseases associated with it. The commonly noted ones are:

These are fluid-filled cysts with seplatosis. They occur when lymphatic channels are blocked. CT scans diagnose the presence of these cysts and they can be removed through local or surgical excision.

These are mostly primary metastatic tumours that spread from intra abdominal cancers. They are usually rare

These refer to secondary metastatic tumours that originate elsewhere and involve the greater omentum. These are more common than the primary neoplasms. These tumours could originate from the ovaries, pancreas, colon, kidneys, uterus or the biliary tract.

Secondary Metastases of the greater omentum does not show symptoms always. However, any signs, if they exist, show up during ct scans or blood tests. In most cases, the symptoms are vague in most cases and are accompanied by unexplained pain, unexpected weight loss or change in appetite.

The causes of omentum cancer have not yet been diagnosed. However, if you notice any of the above-mentioned symptoms then see a doctor right away. Many women, however, who have higher chances of getting ovarian cancer are more susceptible to getting omentum cancer. Have a look at the risk factors:

Once cancer of the greater omentum has been diagnosed, it should be taken care of medically by an oncologist or a cancer therapist for the right treatment. There are several cancer treatment options, the selection of which depends upon the stage and type of cancer. These are the two treatment options for omentum cancer:

What is the link between the greater omentum and abdominal fat?

The omentum contains fat in the form of adipose tissue. Fat is important for the human body as it is a reservoir of energy that needs to be metabolized for action. But when the quantity of fat increases or it is stored in the wrong place, it can become dangerous. If the omentum absorbs extra fat, the layer becomes thicker and pushes the abdomen out. This is what gives the individual the potbelly which is not healthy.

What are Milky Spots?

They are macrophagic collections. A macrophage is a type of lymphocyte which fights against bacterial and viral infections. Their presence and action in the omentum help the immune system by protecting the body against diseases.

The greater omentum wraps around organs of the lower abdomen. Its main function is to help fight infections in the peritoneal cavity.