By Anirudh Agarwal on April 11, 2018 in Endocrine System, Urinary System

The excretory system of the human body is majorly dependent on a pair of kidneys along with a pair of ureters, a urinary bladder, and a urethra. The kidneys resemble the shape of brown beans and measure an average of 10 – 12 cm in length, 5 – 7 cm in width, 2 – 3 cm in thickness in an adult human being.

They are usually reddish brown and are situated between the levels of last thoracic and third lumbar vertebra with a strong attachment to the dorsal inner wall of the lower abdominal cavity. An average kidney weighs around 120 – 170g in dependent on the ideal health of the human.

Location of Kidneys and Anatomy

The inner structure of the kidney consists of a structure called hilum, which is located towards the center of the inner concave surface as a notch. The hilum serves as the entry point for ureter, blood vessels, and neural nerves. The hilum also has a broad space resembling the shape of a funnel towards the inner side, which is known as renal pelvis. The renal pelvis has triangular projections called calyx especially spread all across the kidney. Moving towards the outer layer of the kidney, which has a thick coating, or a tough capsule. 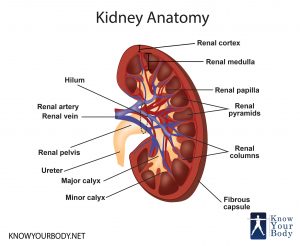 The inner part of the kidney is divided into two zones, namely, an outer cortex and an inner medulla. The inner medulla is further divided into numerous conical masses, also known as medullary pyramids which further projects into the calyces discussed above. The outer cortex always seems to be extended in between the medullary pyramids or the conical masses as renal columns, which is also known as Columns of Bertini.

A pair of kidneys has two million nephrons, which are actually complex tubular structures and are known to be the functional units of the kidney. The nephrons are divided into two structural part, namely, a glomerulus and a renal tubule. The afferent arteries form a complex tuft of capillaries which is further known to be as a glomerulus, from where the blood is transported by a connecting efferent arteriole.

The renal tubule consists of a Bowman’s capsule which appears to be a double walled cup-like structure responsible for enclosing the glomerulus attached to the respective nephron. The combination of a glomerulus and a Bowman’s capsule is together known as the malpighian body of humans or a renal corpuscle. This renal tubule is further elongated and plays a key role in forming PCT – Proximal Convulsed Tubule that is a highly coiled network. 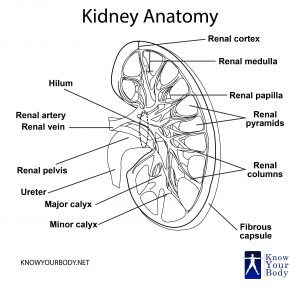 This is further continued with a Henle’s loop which appears to be of a hairpin-like structure. The Henle’s loop consists of an ascending and descending loop where the former is responsible for forming another highly coiled tubular region that is Distal Convoluted Tubule. Together, many distal convoluted tubules of numerous nephrons open into a collecting duct, which is a straight tube. Many collecting ducts further combine together to open up into the renal pelvis through the way of medullary pyramids in the calyces.

The combination of the malpighian corpuscle, PCT, and DCT of the nephron are placed in the cortical area of the kidneys. This is the area where the Henle’s loop connects to the medullary region. The nephrons which have a very small loop of Henle, which extends very little to medulla are called cortical nephrons. The opposite of this where the loop of Henle is a long one is called a juxtaposition medullary nephron. This is all about the structure of the kidneys.

The primary function of the kidneys is to remove the filtrate from the blood and form urine for a well functional excretory system of the body. The formation of urine consists of three major steps – glomerular filtration, reabsorption and secretion that take place in various parts of the functional unit of the kidney. The first step is carried out by the glomerulus. Our kidneys filter around 1200 ml of blood per minute. This is about one-fifth of the blood pumped out by each ventricle of our heart per minute. This part of the filtration is considered to be an ultrafiltration process due to its extensive process through Bowman’s capsule.

Nearly 99% of the filtrate by the glomerulus filtration is reabsorbed by the renal tubules. This process is termed as reabsorption. This process also includes the reabsorption of substances like glucose, amino acids, Na+in the filtrate as a result of an active process. The nitrogenous waste is also reabsorbed by passive transmission. The rest of the reabsorbed filtrate is water is also done by passive transportation in the initial processing segments of a nephron.

Talking about the process of secretion, the tubular cells are responsible for secreting substances like H+ and K+ along with ammonia into the filtrate. This helps I’m the maintenance of the ionic and acid-base balance of the body fluids. Hence, this is considered as an important part of the urine formation.

Innervation of the Kidney

The nerves from the renal plexus make their way through kidney with few branches of renal artery which helps in regulation of the vascular tone and secretion of renin. The renal plexus combined with postganglionic fibers from the sympathetic nervous system is situated around the renal artery. This innervation doesn’t affect the renal functions and regulations since most of them are regulated by hormones.

Insertion of the Stent

In case of blockage of ureters and difficulty on micturition of urine, urethral stenting and nephrostomy helps in the restoration of normal urine flow. In an expert guidance of a nephrologist depending upon the severity of medical condition, a thin tube-like structure called stent is inserted for normalizing any blockage occurred due to any medical complications. 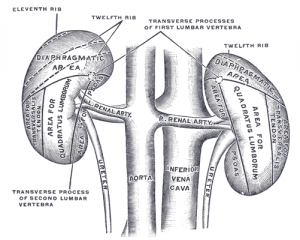 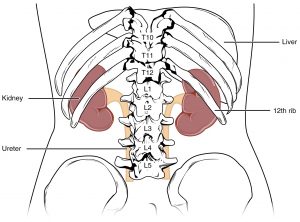 Uremia – The clinical condition of accumulation of urea in the blood due to regular malfunctioning of kidneys is termed as Uremia. This is a highly critical condition and can often lead to kidney failure. The urea accumulated in such Uremia patients are treated with hemodialysis.

Renal Failures – a kidney failure or inability of kidneys to perform their regular function is known as renal failure. The only possible treatment for a renal failure is a kidney transplant from a suitable donor which often is a close relative for minimizing the rejection chances by the immune system of the body.

Renal Calculi – The creation of stone or insoluble mass of crystallized salts of carbonates or oxalates within the kidney is known as renal calculi. This is most common occurring condition concerned with the kidneys.

Glomerulonephritis – This is the condition when the glomerulus of the kidney is infected or undergoes an inflammation. This is curable and a timely visit to a Nephrologist is recommended.

How do you know if you’re suffering from a chronic kidney disease?

A chronic kidney disease is something that develops after years and years of damages produced in the nephron. There are no immediate symptoms until you are diagnosed with major kidney complications. When kidney filtration dips down a certain level of alarming standards, the kidney is vulnerable to failure and starts producing symptoms of a kidney failure. It is best to visit a kidney specialist and get yourself checked up. A regular health checkup is also good for precaution.

Should you panic after a detection of kidney disease or vulnerable symptoms?

As deadly as it may sound, a majority of kidney complications are treatable, though harmful of not diagnosed early. Except for the kidney failure which needs transplant form a suitable donor, kidney disorders can be treated to normalcy under your expert nephrologists’ guidance.

How do we detect a kidney abnormality?

Numerous medical tests such as regular tests of creatinine level and other hormones help in diagnosing a kidney abnormality. Once detected, one does not have to panic since the medical studies are really advanced enough to treat your complication however complex it may sound.

How many kidneys are there in the human body?

There are 2 kidneys in the human body.