By Anirudh Agarwal on April 8, 2018 in Nervous System

A human body is like a machine, performing different functions all at the same time but in a coordinated manner. However, the engine of this mysterious and amazing system is the nervous system. The nervous system is responsible for controlling each and every action of the body, the ultimate controller. Brain sits at the top of this system with many nerves running through our body. The main function of the nerves is to relay information to and from the brain or the spinal cord. Amongst every nerve in a human body, one of the most important
nerves is the sciatic nerve.

What is Sciatic Nerve?

The sciatic nerve is one of the main spinal nerves that arise from the fourth lumbar bone L4 to the third sacral bone, S3. This nerve runs along the entire lower extremity from the posterior portion. The sciatic nerve is the longest and the widest singular nerve in the human body. Its length is the result of the distance it covers, from the hip to foot while the width is the result of the fusion of nerve bundles arising from five vertebrae, L4 to S3.

The sciatic nerve arises from the lumbosacral region and passes through the pelvic girdle. Passing through the entire length of the lower extremity, it terminates into the foot muscles. The nerve runs along the back of the legs i.e. posteriorly. 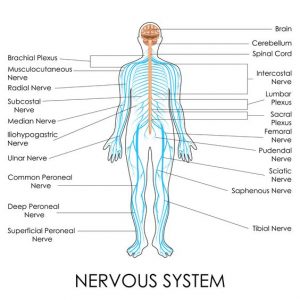 Origin of the Sciatic Nerve

Structure of the Sciatic Nerve

The sciatic nerve is the largest and the widest nerve in the human body arising from the lumbosacral plexus of the spine. It is a spinal nerve and hence is responsible for both motor and sensory functions.

Function of the Sciatic Nerve

The main function of the sciatic nerve is to supply sensations to the skin of the leg except for the interior portion of the leg. This is because the nerve itself runs along the back of the leg.

Innervations of the Sciatic Nerve

The nerve innervates the muscles of the lower leg i.e. in the femoral region while the two branches innervate the lower region of the calves.

Clinical Significance of the Sciatic Nerve

Sciatica pain is a condition where the sciatic nerve is either compressed or is injured due to a possible number of reasons. This compression or partial injury imparted to the nerve causes pain that starts from the lower back and extends till the leg.

Some of the common causes of the sciatica pain are:
• Spinal disc herniation in which the spines presses on either the nerve root of the lumbar region or the sacral region
• A condition where the central canal narrows and compresses the spinal nerve roots can cause the pain. This condition is medically defined a spinal; stenosis
• Sometimes, spasms or seizures or injuries to the piriformis muscle can cause pain in the sciatic nerve
• The pain is sometimes common in pregnant women, especially during their late pregnancy period.

In people, who suffer from sciatica nerve injury, the pain is a result of some other medical process. For instance, it has been proven that in most of the cases, this nerve is injured during the replacement of the pelvic bone with a hip prosthetic implant. This injury can also be caused if something is injected into the buttock in a wrong manner. The wrong process will hit the sensory neurons within the sciatic nerve, resulting in the loss of sensation.

Sciatica pain is medically defined as a condition where there is a shooting pain from the waist down the legs. This is caused due to the compression of the sciatic nerve. Pain is the most common symptom of sciatica but its symptoms vary from person to person.

The condition is not life-threatening. But if the condition worsens, the pain will elevate to a point where you will not be able to move your legs. In such conditions, medical practitioners advice for a spine surgery.

Can rest help in reducing the sciatica pain?

Doctors suggest that a person suffering from sciatica pain should take rest. It is because sitting or standing for hours put pressure on the nerve and the pain heightens. A proper bed rest can reduce the pain in the initial stages.