The Large triangular muscle in the medial side of the thigh is known as ‘Adductor Magnus’. As it is an adductor, it pulls and contracts the hip towards the body midline. This action enables activities like walking, running and a number of other actions. Though the adductor is a muscle, it is also considered a part of the hamstring group as well. 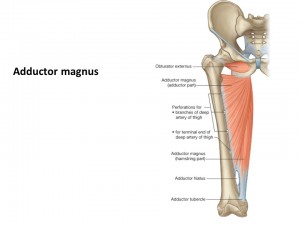 Origin of the Adductor Magnus

The adductor magnus originates in the pelvic region, arising from the tuberosity and pubis of the ischium, which is also known as the sitting bones or sitz.

Different portions of the Adductor Magnus:-

Innervation Of The Adductor Magnus

The main function of the Adductor Magnus is the adduction of the hip joint. It further supports outward rotation, inward rotation, flexion, and extension. Overall, the hip adductors play an important role in balancing the pelvis during daily activities like standing and walking. The adductor magnus brings the legs toward the midline of the body. These adductors are also responsible for adducting or crossing the legs across the midline of the body. Activities like basketball, football, ice hockey etc are made possible because of this muscle.
The lateral, upper part of the adductor magnus is an incompletely separated, often considered another muscle i.e, the adductor minimus. These are generally separated by a branch of the superior perforating branch of the profunda femoris artery.

Check out some of the pictures of Adductor magnus muscle. 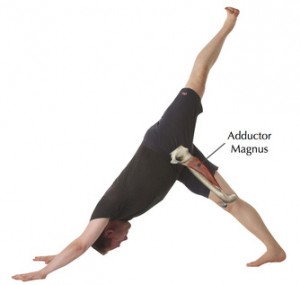 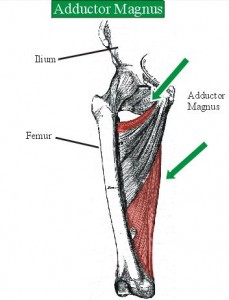 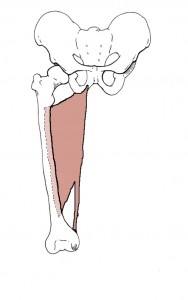 Adductor muscle strain usually involves inflammation and pain along the inner thigh muscles, which include the adductor longus, the adductor medius, the adductor Magnus, the gracilis muscle and the groin. The muscles attach to the bone via tendon. These muscles permit hip and legs to move across the body. Most of the injuries occur at the junction between the tendon and the muscle, or the attachment of the tendon to the pelvic bone. This strain may or may not be a complete tear of any muscle. Of these muscles, the adductor longus is the most commonly injured muscle.

The muscle strain is generally graded in three, namely, Grade 1, Grade 2 and Grade 3. A Grade 1 strain is mild in nature. there is no major tear, the tear being microscopic. There is no loss of strength. Whereas, the Grade 2 strain is moderate in nature. There is tearing of fibers within the substance of the tendon right at the junction of the bone and tendon or the muscle and tendon junction. There is a decrease in strength. The third Grade is where there is a complete rupture of the tendon, though this is highly uncommon.