By Anirudh Agarwal on April 5, 2018 in Skeletal System

In human anatomy, Pelvic Girdle is a basin-shaped structure of bones that connects the trunk of the legs and holds the support of the intestines, urinary bladder, and the interior sex organs. It is also termed as the bony pelvis.

The Pelvic Girdle consists of two paired hipbones, called the sacrum and coccyx (innominate or pelvic bones). These bones have four articulations inside, these are:

The ring-shaped structure situated in the Pelvic Girdle functions as the birth passage of infants during delivery in the female human body. The pelvis provides an add-on attachment for the muscles that support the trunk and helps in the movement of legs, hips, and the trunk. In infants, this pelvis is very narrow. Once the child begins to walk the pelvis broadens which results in the sacrum to slide down into an articulation with the ilium hence supporting in development of the lumbar curve of the lower back. 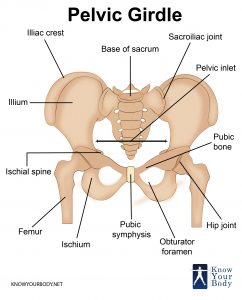 Furthermore, the Pelvic Girdle allows the pelvic region to be divided into two:

1. The greater pelvis or the superior portion of the pelvis provides support for the lower abdominal viscera.

2. The lesser pelvis or the inferior pelvis inhibits the pelvic cavity and pelvic viscera.

Secondly, there is a Pelvic Outlet that is located at the end of the lesser pelvis and the beginning of the pelvic wall. Its borders are:

The well-built and firm pelvis girdle structure helps in performing various roles in human anatomy, some of these functions are:

Comparison of the Female and Male Pelvic Girdle

The pelvic girdle in men and women are different and are apparently different because of the functions it performs and the size of the pelvic girdle. The differences are highlighted below:
1. The male body pelvis is termed as the android pelvis while a woman has a gynaecoid pelvis.
2. The slight difference is the structure can be observed by the greater pelvic outlet since it is bigger in size childbirth process becomes a lot easier. Even though it is broader but it is lightweight as compared to the android pelvis.
3. In the android pelvis girdle, the bones are thicker and heavier. The larger sciatic notch of the male hip bone is narrow as compared to the broader notch of females.
4. The ischial tuberosities in female body are placed further apart which helps in increasing the width of the pelvic outlet. The sub-pubic angle is larger in females (greater than 80 to 90 degrees) as compared to in males (less than 70 degrees).
5. The female pelvic inlet or the pelvic brim is an oval shape as compared to males which have a heart shape.
6. There are notable differences between female and male hip bones, the hip bone in the body helps in understanding the most accurate sex determination of human anatomy.
7. The gynaecoid pelvis is at a greater angle in the sub-pubic arch and is more curved and with a lesser pronounced sacral promontory.

Pelvic Girdle helps in proper weight management from the upper axial skeleton to the lower appendicular mechanism of the skeleton allowing movements such as walking, sitting and running. It serves as an attachment to various muscles and ligaments located within the structure of the pelvis.

What organs are protected by the pelvic girdle?

The pelvic girdle protects the digestive tract, bladder, and the reproductive organs.