By Anirudh Agarwal on April 5, 2018 in Nervous System 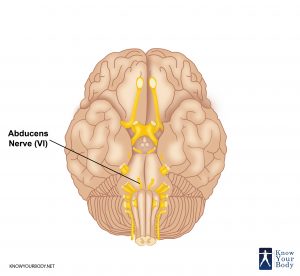 Before entering the orbit of the eye via the superior orbital fissure, the nerve first travels through the cavernous sinus at the tip of the petrous temporal bone. Inside the eye’s orbit, the Abducens Nerve then ceases by innervating the lateral rectus muscle. There are 4 divisions of Abducens Nerve:

1. Nucleus – Within the pons, the nucleus is situated at the upper part of the rhomboid fossa beneath the colliculus facialis.

2. Cisternal portion – These nerves emerge below the pons at the pontomedullary junction into the prepontine cistern. It then routes to the clivus and is enclosed within a fibrous casing called Dorello’s canal. The nerve then takes a turn towards the medial petrous apex towards the cavernous sinus.

3. Cavernous sinus portion – Inside the cavernous sinus, the Abducens Nerve is situated at the inferolateral in the internal carotid artery, medial to the lateral wall of the sinus.

4. Orbital portion – Once the nerve enters the orbit through the superior orbital fissure. It is an inferior nerve that passes through the tendinous ring.

The Abducens Nerve also termed the sixth nerve is a somatic efferent nerve in human anatomy that helps in controlling the movement of the lateral rectus muscle (lateral side of the eyeball in the orbit) located in the eye area.

The nature of damage and injury can be manifold in the long course of Abducens Nerve that is situated between the brainstem and the eye. It is susceptible to a number of clinical conditions such as:

The Abducent nerve or the CN VI is tested by asking the patient to keep their heads still. The physician or the doctor then draws two large H formations in front of the patient. The patient is advised to follow the fingers that draw the letter H. While doing so if the patient feels any discomfort or double visions then the necessary course of therapy is advised.