By Anirudh Agarwal on April 4, 2018 in Nervous System

What is Glossopharyngeal Nerve?

A paired set of nerves that is ninth in position and is a part of the 12 cranial nerves running across in the brainstem is called the Glossopharyngeal Nerve (CN 9). It runs through the upper medulla of the brainstem and travels from the base of the skull and ends in the human mouth beneath the tongue in the mucous glands and palatine tonsil.

The Glossopharyngeal Nerve is a mix of various nerves comprising of both sensory and motor nerve fibers. The sensory fibers originate in the pharynx, middle ear, posterior one-third of the tongue and the carotid body and sinus. These fiber nerves lapse at the medulla oblongata. The motor fiber nerves originate in the medulla oblongata, and they end at the parotid salivary gland.

The Glossopharyngeal Nerve naturally exits the medulla oblongata from the postolivary sulcus and passes crossways across the flocculus. It leaves the skull through the pars nervosa of the jugular foramen in a separate casing of the dura mater. Later it bypasses between the internal jugular vein and internal carotid arteries. It moves down in front of the concluding vessel to the lower border of the stylopharyngeus. It then arches forward to form an arch shape on the side of the neck. From here is surpasses under a sheath of the hyoglossus muscle, and is finally dispersed to the palatine tonsil, the mucous membrane of the fauces, the mucous glands of the mouth and lasts beneath the human tongue. 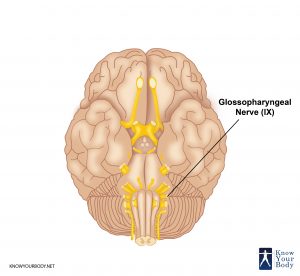 The several branches of Glossopharyngeal Nerve are:

2. Stylopharyngeal is also called the Tympanic Nerve that is a well-developed branch which supplies to the stylopharyngeus muscle.

3. The nerve to carotid sinus is categorized into superior as well as inferior Caroticotympanic Nerves that moves down to the interior carotid artery and travels till its origin point. It also exists in line with the pharyngeal branch of the vagus as well as the branches of the sympathetic nerves.

4. Tonsillar branches’ main function is to innervate the palatine tonsil by structuring around it a plexus. From this plexus, there are filaments that are distributed to the muscular palate and the arch-shaped opening at the back of the mouth.

6. One branch of the Glossopharyngeal Nerve runs to the carotid sinus, It is a nerve that goes down till the frontal area of the internal carotid artery, this branch is called the sinus nerve or Hering’s nerve. Its function is to take impulses that help in maintaining sturdy blood pressure from the baroreceptors in the carotid sinus.

The Glossopharyngeal Nerve performs various functions such as:

1. Receiving various forms of sensory fibers from the tongue, the carotid body, the tonsils, the pharynx and the middle ear. It also supplies parasympathetic fibers that provide rest to the body and assist the parotid gland (salivary gland) in digestion processes.

2. The Glossopharyngeal Nerve and the vagus nerve together develop certain parts of the pharyngeal plexus, which provisions as nerves to the palate and parts of the throat (larynx and pharynx).

3. It helps in carrying visceral sensory information from the carotid sinus and carotid body.

4. Also aids in the provision of sensory information from the inner surface of the tympanic membrane to the upper pharynx and the posterior one-third of the human tongue.

5. It helps in providing taste sensation from the posterior one-third of the human tongue.

1. What is medulla oblongata?

2. What are the diagnosis methods of Glossopharyngeal Nerve?

The clinical tests performed for diagnosis of a damaged glossopharyngeal nerve is called the gag reflex of the mouth in which the patient is asked to swallow or cough and even includes evaluation of speech impediments.

3. What is a Pharyngeal branch of glossopharyngeal nerve?