By Anirudh Agarwal on March 16, 2018 in Digestive System, Respiratory System

The pharynx is a component of the digestive system and respiratory system. It is a soft part above throat that links the nose and mouth to the esophagus, which is the tube that carries the food to the stomach. As part of the digestive systems, its muscular walls support in swallowing process and carrying food to the esophagus. Being part of the respiratory system, it enables movement of air from mouth and nose to the larynx in function of breathing.

Characteristics of the Pharynx

The pharynx is essentially part of the throat and is located behind the nasal cavity and mouth and above the larynx and esophagus. It connects to the middle ear cavity on either side through the Eustachian tubes. 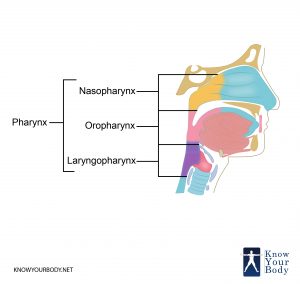 The structure of pharynx is divided into three components – Nasopharynx, Oropharynx, and Laryngopharynx.

The nasopharynx is the upper part of the pharynx that stars from the skull base to the upper layer of the soft palate. It comprises space between the soft palate and internal nares and is above the oral cavity. It consists of adenoids, which are also called as pharyngeal tonsils that are lymphoid tissue structure situation in nasopharynx’s posterior wall.

This part of pharynx rests behind oral cavity, starting from uvula to hyoid bone. It opens anteriorly from the Isthmus faucium into the mouth, and its lateral wall rests between the palatopharyngeal arch and palatoglossal arch, which is the palatine tonsil. Its anterior wall comprises the tongue base, epiglottic vallecula, and the lateral wall is prepared of tonsillar fossa, tonsil, and tonsillar pillars. Its superior wall comprises interior surface from the soft palate and the uvula. It enables passing of air and food through a layer of connective tissue known as epiglottis.

Also called as hypopharynx, it is the caudal component of the pharynx. It links to the esophagus and rests in the inferior to the epiglottis. It diverges into digestive and respiratory pathways. From this point, it is continuous from the esophagus posteriorly. It carries the fluids and foods to the stomach and air enters into the larynx anteriorly. The three major parts of laryngopharynx are – the pyriform sinus, posterior pharyngeal wall, and postcricoid area.

The circular muscle contracts from the inferior to superior to obstruct the lumen and boost the bolus of food inferiority into the esophagus. These muscles are loaded with glasses and are an incomplete muscular circle, linking to the neck structures. The various types of circular muscles are:

The main functions of the pharynx are respiratory and digestive in nature.

The branches of the external carotid artery form the arterial blood supply. The pharyngeal venous plexus is the vein that drains the blood into the internal jugular.

The most common disease caused in Pharynx is pharyngitis. If you are experiencing such problem then your doctor will examine the throat for having any gray or white patches. The doctor would even check the nose and ear for swollen lymph nodes near the side of the neck. If the doctor identifies any problem then he will perform the throat culture.

After the throat culture, the doctor would also perform a blood test to identify the actual cause of pharyngitis. The blood sample is sent for testing to determine that whether you are suffering from mononucleosis or suffering from any other type of infection.

Most throat problems get better within a week. Usually, antibiotics are prescribed in order to confirm that the risk of the ailment is completely rectified. Besides the painkillers, the doctor suggests to: 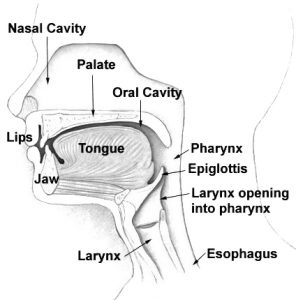 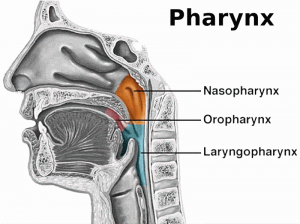 What exactly are the tonsils?

The tonsils are structures made of lymphoid tissue that are located in the pharynx. It has an immune-related function which mainly monitors the air, fluids, and food entering the nose and mouth.

What are the different types of tonsils in the human body?

This is also known as the pharyngeal lymphatic ring. Waldeyer’s Ring is a collective term for lymphoid tissue which includes the four tonsils named above. It is basically an uninterrupted ring that has protective functions in nature in keeping out microbes and irritants that are inhaled or ingested.

What is a tonsillectomy?

Tonsillitis refers to inflammation of the palatine tonsils. The tonsillectomy is a surgical procedure that removes the tonsils when they become inflamed and uncomfortable.

Are there risks associated with a tonsillectomy?

The tonsillectomy is a very common procedure. However, there could be a few associated risks such as swelling, infections, bleeding and extreme reactions to the anesthetics used.

What happens to the adenoids as you age?

The adenoids are at their largest during childhood, roughly between the ages of 3-5. After that, it regresses in size.

The pharynx is a tubular structure that originates at the back of the mouth and nose and extends till the larynx and esophagus. It has both respiratory and digestive functions by providing a pathway for filtered air to reach the lungs and food to reach the stomach through the esophagus.