By Anirudh Agarwal on February 20, 2018 in Nervous System

What is Brachial Plexus and where is it located?

An assorted group of nerve fibers that begins at the root of the neck passes through the axilla (armpit or the underarm) and enters the upper arm of the human body is called Brachial Plexus. It is a useful network of nerve fibers that supply musculature to the upper limb of the human body. The plexus passes through the spinal cord, extends to the cervicoaxillary canal in the neck and lasts into the armpit. It is formed by the anterior divisions of the cervical spinal nerves that are termed C5, C6, C7 and C8, and the T1.

The plexus’ main function is to provide for the motor innervation (supplying of nerves) to all of the muscles to the upper arm. The Brachial Plexus has important five parts which are:

2. Trunks – From the base of the neck these roots then the roots of the Brachial Plexus unite and form three trunks. These are:

3. Divisions – The human neck has a posterior triangle shape within which the trunk divides itself into other two branches. One of these travels towards the frontal body (anterior) and the second one travel towards the back side of the body (posterior). So in total, there are three frontal and three of the latter nerve fibers which then pass on to the axilla (armpit or the underarm).

4. Cords – Once the frontal and latter divisions have crossed the threshold of the armpit area, they combine to form other new nerves. The three nerves are:

a) The lateral cord is formed by:

b) The posterior cord is formed by:

c) The medial cord is formed by:

5. Branches – In the upper limb near the axilla or the underarm, the three cords combined together give rise to five branches. These nerves provide continuous innervation to the muscles and skin present throughout the upper limb. These branches have five subtypes which are:

1. A human body gets the cutaneous and muscular innervation through the Brachial Plexus which is supplied to the upper arm. However, there are two exceptions wherein the trapezius muscle is innervated by the spinal accessory nerve (CN XI) and second one wherein a specific area of the skin near the axilla (underarm) is innervated by the intercostobrachial nerve.

2. The Brachial Plexus plays a significant role by communicating through the sympathetic trunk that joins the plexus roots.

3. All the terminal branches of the Brachial Plexus have specific sensory, motor and perceptory functions. 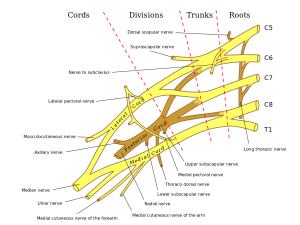 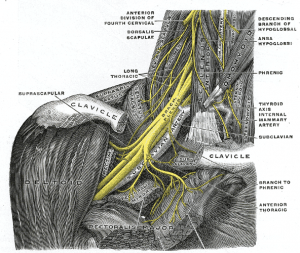 There are various type of such injuries that can occur in the mild form of a tear or can be grievous as a root tearing away from the spinal cord, some of these types are:

The structure of the Brachial Plexus injuries is a complex one and only a thorough understanding and comprehensive examination of the nature of the injury can give a physician a better understanding of the treatment. Methodologies such as clinical examination, Electrodiagnostic analysis (EMG, NCV, SNAP, SSEP) and Imaging analysis (CT, MRI) are prescribed as evaluations. Some of these evaluations are repetitive and need continuous intervention for a progressive recovery of the patient.

A spontaneous recovery may not be the solution to Brachial Plexus injury. However, the physician will need a deep study and analysis of the type and severity of the injury. Depending on the nature of injury the physician will advise either of the two options:

Physiotherapy or physical rehabilitation therapy is always part of the recovery process for any mild Brachial Plexus injuries.

The degree of severity of the functions of the neck, back, forearm and any other parts in the upper limb will call for a surgery route to a proper recovery.

Brachial Plexus injuries can affect the cutaneous sensations and activities in the upper limb. These injuries occur due to stretching, wounds and even certain diseases. The injuries mostly occur in the posterior triangle of the neck or the armpit or the underarm. A physician is most likely to first test the movements through a physical test and then assessing it through comparison with normal abilities of the functions of the Brachial Plexus, this helps in assessing the complexity of the injury.

Commonly such injuries occur during accidents wherein the hand lands it weight on to the shoulder causing a stretch (road accidents – bike or car or even falling down a tree). These stretches cause ruptures in the various parts of the Brachial Plexus causing some amount of pain until the end of the spinal cord.

1. How is the Brachial Plexus injury treated?