By Anirudh Agarwal on March 16, 2018 in Nervous System

Amongst the twelve pairs of the cranial nerve in the brain, the eleventh pair of cranial nerve (CN11) is called the Accessory Nerve. It supplies innervation to the sternocleidomastoid muscles that helps in tilting and rotating of the head and trapezius muscles that helps in performing various actions such as shoulder elevation and abduction motion (motions that move a structure away from the center of the body) of the arm.

It enters into the skull from the foramen magnum, which is a big opening at the skull base. The nerve moves near the inner wall of the skull near the jugular foramen. After this the nerve routes through jugular foramen with vagus nerves and glossopharyngeal.

The structure of accessory nerve is divided into three parts:

The necessary nerve intersects the interior jugular vein across the level of posterior belly of the digastric muscle. The vein is in front of around 80% people and is at the back of 20% people.

Conventionally, it was considered that accessory nerve has a small cranial aspect that diminishes from the medulla and then connects with spinal accessory aspect before separating off to the nerve to link the vagus nerve. But there was a study introduced in 2007 that stated that in most of the people, the cranial component does not mark any different link to the spinal aspect. The roots of such different aspects were separated by a fibrous sheath.

The basal plate in the embryonic spinal components C1-C6 derives the accessory nerve.

The anatomy of the accessory nerve can be studied by detailing its parts. The Accessory Nerve is divided into two parts:

The nerve fiber sternocleidomastoid controls the action of turning the head. It is considered that this is capable of changing sides twice which means it is controlled by the brain on the same side of the body. Its contraction leads to turning of the head on the opposite side. This can be explained by understanding that the head turns to that side of the brain from where it receives visual information.

Accessory nerve supplies blood to the trapezius muscles and the sternocleidomastoid muscles. It is the 11th of twelve pairs of the cranial nerve.

The treatment options are varied in number when an iatrogenic (surgery done by the surgeon) spinal Accessory Nerve is injured. An intraoperative procedure or a postoperative procedure can help in the recuperation of a damaged spinal Accessory Nerve. One such example is the Eden-Lange procedure wherein the most of the remaining purposeful shoulder muscles are surgically relocated, mostly used in the treatment of trapezius muscle palsy. 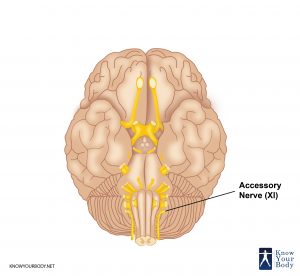 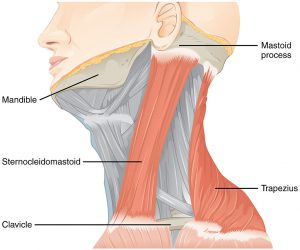 The clinical complication of accessory nerve involves testing the nerve by analyzing the function of sternocleidomastoid muscles and trapezius.

If trapezius is weak then this would result in one-sided injury to the accessory nerve. When a person experiences weakness in turning the head then it suggest injury of the contralateral accessory nerve. The weak leftward turn indicates weak sternocleidomastoid muscle, while the right side weakness indicates weak left sternocleidomastoid muscle and hence the left area of spinal accessory.

The major reasons for clinical complications of the accessory nerve are trauma, tumors, surgery, and compressing of the jugular foramen.

The major disease experienced in the accessory nerve is its injury. This usually occurs because of following reasons:

When there is injury or damage to the accessory nerve then this can lead to atrophy, depression of shoulder girdle, and abnormal movement of the shoulder, weakened abduction, and protruding scapula. Such situations can lead to other medical issues like torticollis.

The patient is asked to rotate their head, shrug their shoulders and upon observation of any signs of discomfort or pain in performing the above-mentioned actions, it is understood that there is a course of treatment and therapy has to be provided. A common cause of Accessory Nerve damage is due to a surgery performed or a medical procedure performed during operations such as node biopsy of the cervical lymph which causes damage to the nerve. Mostly termed as palsy of the Accessory Nerve, this can result in muscle wasting and paralysis of the sternocleidomastoid. An asymmetrical neckline also occurs due to damage to the muscle.

The treatment of accessory nerve can be conducted in three different types:

This therapy involves treatment of spinal accessory nerve through occupational and physical therapy. It is great to relieve the pain. The aim of this treatment is to promote gradual movement of the nerve and to ensure proper functioning of related body parts.

This is another crucial way to treat the injured accessory nerve. This treatment aims to regain or maintain the passive ROM from shoulder. It limits the stiffness of shoulder capsule and ligaments that can occur with improper alignment of the shoulder.

This treatment is suggested only when it is obvious and confirmed injury of the accessory nerve. The doctor suggests surgical treatment when a patient experiences dense paralysis, distressing subjective symptoms, severe pain, the absence of clinical improvement after multiple examinations, and the nerve does not show any contraction.

What purpose does Accessory Nerve offer?

One of the most significant cranial nerves, Accessory Nerve helps in controlling the movement of various neck muscles. It also provides the motor function to the sternocleidomastoid muscle, which broadens the neck and trapezius, also the upper back and shoulder. Any damage to the Accessory Nerve can cause a considerable amount of dysfunction to shoulder’s performance.

What is Accessory Nerve Palsy?

It is a complication that may occur post a surgery performed on the neck’s posterior triangle shaped area that is located between the sternocleidomastoid and trapezius on both sides of the neck.

What is the clinical examination procedure for damage in Accessory Nerve?