By Madhulima Acharya on September 10, 2013 in Muscular System

It is one of the two long, thick muscles attached to the superior layers of the anterior region of the neck. It forms a part of a group of muscles called anterolateral neck flexors. Sternomastoid is the other name of the superior muscle. For simplicity, it is abbreviated as SCM.

As aforementioned, it is located on the side of the neck and appears like a strap or cylinder that runs diagonally from the back of the ear to the collarbone as well as breastbone/sternum. 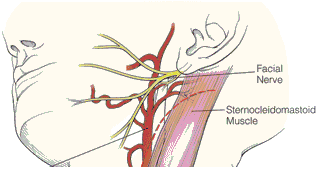 SCM originates at the manubrium, the broad upper part of the sternum, and the clavicle or collarbone. It attaches to the mastoid process, a large, bony prominence on the base of the skull behind the ear, containing air spaces that connect with the middle ear cavity.

The central portion of the sternomastoid is thick and narrow. However, the two ends of the muscle are wider and thinner. The medial or sternal head of SCM is a rounded bundle of fibers called fasciculus, which originates from the upper part of the anterior surface of the manubrium. The front part of the sternal branch comprises of a tendon, whereas the back appears fleshy. Normally, it is directed superiorly, laterally, and posteriorly. On the other hand, the lateral or clavicular branch of the muscle consists of tendon-like fibrous membrane sheets that arise from the superior border and anterior surface of the medial clavicle. It is directed almost vertically upward. The supraclavicular fossa above the clavicle separates the two branches at their origins. However, the two heads merge again below the middle of the neck to form a thick, rounded muscle, which inserts along with a continuous line between the lateral surface of the mastoid process by a strong tendon and the lateral half of the superior nuchal line of the occipital bone by a thin aponeurosis.

The right sternomastoid rotates the head to the left and flexes it to the right. On the other hand, the left SCM turns the head to the right and flexes it to the left. When both the muscles are in action the neck flexes and the head extends to facilitate smooth movement. The spinal accessory nerve supplies motor fibers (innervation) from the central nervous system to the SCM to aid in forceful inhalation of air.

Although SCM is rarely subjected to any strain, there are certain trigger points on both clavicular and sternal branch that generate pain in the head, face, ears, and jaws. Neck stiffness or spasm could be attributed to a tight sternomastoid. The trigger points along the muscle are also responsible for the following:

SCM syndrome can be treated by performing few exercises on a daily basis. In order to stretch the muscle, first, the back should be kept straight and shoulders lowered. Then the head should be raised and turned to the left. Patients must hold this position for 20 to 30 seconds and repeat the exercise on the other side. Massage of the SCM is the best way to alleviate pain. However, it would be advisable to consult a physician before undergoing self-treatment. 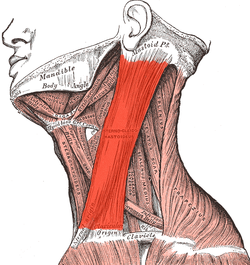 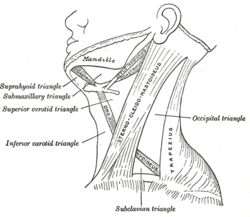