By Amit shah on September 11, 2013 in Female Reproductive System

It is one of the two inflamed exocrine glands in females who have attained reproductive maturity. The gland becomes functional only after childbirth. It is normally a rudimentary structure in males.

It is located in the breast overlying the pectoralis major, the fan-shaped muscles situated at the chest. 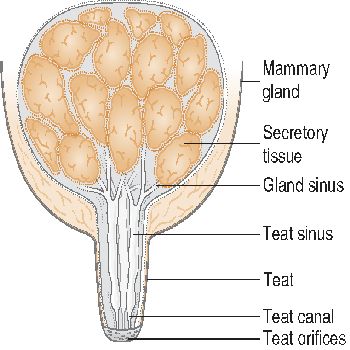 It is a modified sweat gland. In fact, it is closely associated with apocrine sweat glands that are usually found in areola and nipples of the breast. However, some theories have proved that it has adapted from sebaceous glands that secrete sebum into the hair follicle near the surface of the skin.

A developed gland comprises of alveoli that are lined with milk-secreting cuboidal cells and surrounded by myoepithelial cells. The alveoli form a complex network of branching ducts/channels that join to form lobules that produce milk under the influence of the female hormone estrogen. Each lobule has a lactiferous duct, which opens into the nipple of the breast. The alveoli transport milk from the lobules to the nipple, which is sucked by the infant during breastfeeding.

As discussed earlier, the gland is a milk-producing structure, composed of numerous fat cells. The breast ducts are capable of secreting during pregnancy. Elevated levels of prolactin, estrogen, and progesterone signals milk secretion, also called lactation. Suckling of the infant results in secretion of oxytocin, which causes the contraction of myoepithelial cells and subsequent excretion of milk by the alveolar units into the lobule toward the nipple, where it collects in the ducts.

The milk-producing gland is a tumor-prone region of the body that gives rise to breast cancer in a large number of adult females. Mastitis is an infection of the tissue of the breast that occurs most frequently during the time of breastfeeding. In severe cases, an abscess may develop and impairs the release of milk from the glands.

Do men have mammary gland?

The mammary gland is present in males but is dormant in nature. 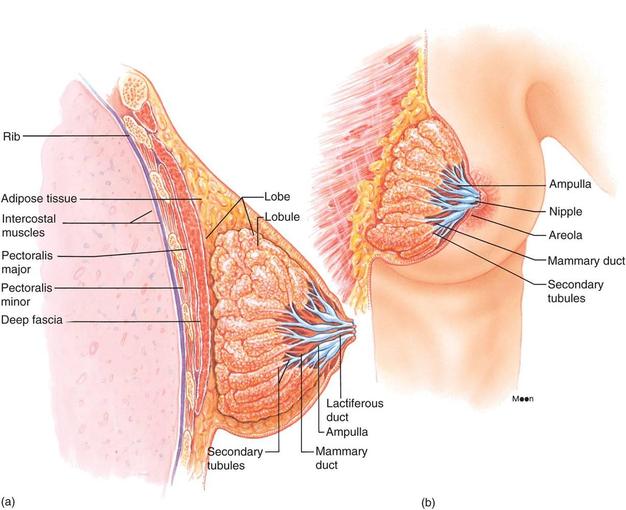