By Anirudh Agarwal on February 15, 2018 in Nervous System

The Hypoglossal Nerve emerges like various small rootlets from the front of the medulla which is located at the bottom part of the brainstem in the preolivary sulcus. It passes through the subarachnoid space and penetrates into the dura mater next to the hypoglossal canal (an opening in the occipital bone of the skull). From here the nerve takes the name of the meningeal branch and selects up a branch from the anterior ramus of C1 traveling close to the vagus nerve and spinal division of the accessory nerve. Lastly, it curves down from behind the vagus nerve, passing between the internal carotid artery and internal jugular vein slouching on the carotid sheath. From the hypoglossal nucleus (located in the brainstem) from where this nerve arises in form of various small rootlets, it creates a passage for itself through the hypoglossal canal and down to the neck and again passes over the tongue muscles. The Hypoglossal Nerves are located on the left as well as on the right side of the body. This nerve is responsible for motor innervation of the majority of the muscles of the tongue; these are divided into two groups:

The Hypoglossal Nerve is formed when the first pair of collections of mesoderm comes into existence next to the main axis of an embryo during development inside the womb. The nerve is first observed to be a series of roots in the fourth week of development inside the mothers’ womb and by fifth week it forms as a single nerve and links to the tongue.

1. It helps in controlling certain tongue movements that are necessary for talking, swallowing, movement from one side to other and sticking out the tongue as well.

2. The Hypoglossal Nerve supports the motor functions of the extrinsic and intrinsic muscles of the tongue, these muscles are genioglossus, hyoglossus, and styloglossus.

3. This nerve is also responsible for various other involuntary activities and movements such as clearing saliva of the mouth.

4. The speech and articulation movements happen when the hypoglossal nucleus interacts with the reticular formation. 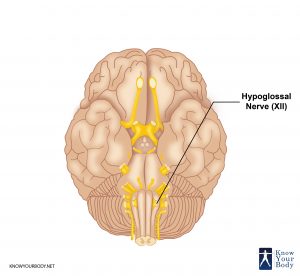 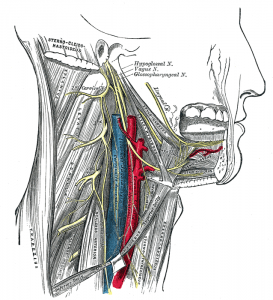 Though it is a rare occurrence that any damage can be caused to the Hypoglossal Nerve, it is mostly gunshot wounds and compression caused by tumors can result in damage to this nerve. Also, surgical damage, medullary stroke, multiple sclerosis, Guillain-Barre syndrome and infections like sarcoidosis can be a root cause of damage of the Hypoglossal Nerve.

Since this nerve shares a close proximity with nerves, arteries, and veins, the damage outcome is not isolated. For example, when damage occurs to any of the facial and trigeminal nerves from a clot of the vertebrobasilar artery, it could faintly affect the hypoglossal nerve too, hence resulting in complexities of speaking, eating and chewing. A motor neuron disease is a common disease that can have a harmful impact on the Hypoglossal Nerve.

During any injuries caused to the Hypoglossal Nerve, the tongue will be wasted away and will not stick out straight. A doctor will examine the tongue and its movements, if found to be protruding to one side, it could be because of fasciculation (bag of worms) or wasting (atrophy). If the tongue appears to be weak it may result in slurred speech, alveolar stops, velar nasals, dental stops etc. sometimes the tongue strength by an examiner by feeling the tongue from pressing of the cheek, this is done by poking the tongue from inside the cheek.

1. What causes damage to the Hypoglossal Nerve?

The hypoglossal nerve can get damaged by strokes, multiple sclerosis, and tumors that stem in the brain. During a stroke, a patient is unable to speak because of a damage caused to the Hypoglossal Nerve.

2. What is Hypoglossal Nerve Palsy?

When the Hypoglossal Nerve is damaged it comes with a paralysis along with tremors in muscles and numbness, this severe damage is termed as Hypoglossal Nerve damage. One of the most common forms of this nerve’s palsy comes from paralysis of one side of the tongue.

3. What is the function of the Hypoglossal Nerve?

The Hypoglossal nerve is the cranial nerve number 12 located in the path of the mouth and the throat. Its common functions include the ability to speak, eating, chewing and movement of the tongue. It also helps in swallowing food and formation of speech.