By Anirudh Agarwal on February 12, 2018 in Nervous System

The trigeminal nerve is the biggest and most intricate of the 12 cranial nerves. It is the 5th and most developed cranial nerve with a wide distribution mechanism. This is a mixed nerve performing a gamut of motor somatic and sensitive fibers linked to the face. Primarily, the nerve is responsible for performing all sensitive innervation functionalities, such as pain, temperature, touch, proprioception, and other motor functions, like chewing, biting, and more.
It has the name of ‘trigeminal’ because this single nerve has three main branches –the mandibular nerve (V3), the maxillary nerve (V2), and the ophthalmic nerve (V1). While the maxillary and ophthalmic nerves execute only the sensory functions, the mandibular nerve performs both motor and sensory functions.

The trigeminal nerve originates in the posterior fossa of the stem of the brain and follows a lengthy and intricate course towards the distribution mechanism. It crosses multiple regions and has an intricate anatomy and links to numerous other structures. The fibers of the nerve originate within the brainstem and are components of numerous gray matter nuclei covering all the brainstem and also the first segment of the spinal cervical.

There is no precise location of the trigeminal nerve in the brain as it composed of three branches, the mandibular, maxillary, and ophthalmic, each connecting the brain to distinct parts of the face. Even in the face, the nerve is distributed widely in the face and is located in places like eyes, scalp, nose, lips, upper jaw, forehead, and the lower jaw.

The trigeminal nerve originates from the three sensory nuclei and one motor nucleus that extend from the midbrain to the medulla. The nucleus is the collection of innumerable nerve cells within the central nervous system.
The sensory nuclei converge at the level of pons to create a sensory root. Even the root is continued to be formed from the motor nucleus. Both these roots are analogous to the ventral and dorsal roots of the spinal cord.
The sensory root expands from the middle cranial fossa to the trigeminal ganglion. The ganglion refers to a cluster of the nerve cells outside the central nervous system. The trigeminal ganglion is situated lateral close to the cavernous sinus forming a depression of the temporal bone, which is called as the trigeminal cave.
There are 3 divisions of the trigeminal nerve that occur due to its peripheral nature – Mandibular, Ophthalmic, and Maxillary.
The ophthalmic nerve, as well as the maxillary nerve, move laterally to the cavernous sinus located in the cranium through the foramen rotundum and superior orbital fissure. There is an exit of the mandibular nerve through the foramen ovale that enters into the infratemporal fossa.

Anatomy and Branches of Trigeminal Nerve

The trigeminal nerve is divided into three nerves – maxillary, mandibular and ophthalmic nerves from the trigeminal ganglion.

This nerve separates into three branches – nasociliary, lacrimal, and frontal that innervate the mucous membrane of derivatives and the skin of the frontonasal prominence components such as:

Post the ganglionic fibers coming from the pterygopalatine ganglion obtained from the facial nerve travels with the zygomatic branch of the V2. They join the lacrimal branch of V1. These fibers offer the parasympathetic innervation to the lacrimal gland.

This nerve is divided into 14 terminal branches that innervate the mucous membrane, skin, and derivatives sinuses of the maxillary prominence of the primary pharyngeal arch:

This nerve separates into four terminal branches within the infra-temporal fossa – the inferior alveolar nerve, buccal nerve, lingual nerve, and the auriculotemporal nerve.
All the 4 branches of this nerve innervate the skin, striated muscle, and mucous membrane of the mandibular prominence of the 1st pharyngeal arch. It offers sensory supply to and from the external ear, lower lip, chin, mucous membranes, and bottom area of the oral cavity, and lower molar, canine teeth, incisor, and the gingiva.
The motor supply of this nerve is to the muscles of mastication, lateral and medial pterygoid, and temporalis, and masseter, tensor veli palatine, anterior belly of the digastric muscle, mylohyoid muscle, and tensor tympani.
This nerve offers parasympathetic supply to the submandibular and sublingual glands, and the parotid gland.

This is the area where the sensory portion of the trigeminal nerve enters the pons. At this point, vascular anomalies, like arteriovenous malformations, tumors, and inflammatory and infectious situations, like Lyme ailment, viral encephalitis, can damage the trigeminal nerve.

The trigeminal nerve performs the sensory function of providing tactile, nociceptive, and proprioceptive movements to the mouth and face. The motor function of the nerve triggers the muscles of mastication, tensor veli palatini, tensor tympani, anterior belly and the mylohyoid.
There are somatic afferent fibers in the trigeminal nerve that innervate the facial skin through mandibular, maxillary, and ophthalmic divisions. Also, this nerve carries special visceral efferent or SVE axons that innervate the mastication muscles.
The mastication muscles are the motor components of the trigeminal nerve that regulates the movement of eight muscles. Excluding the muscles of tensor tympani, these muscles are involved in performing the function of swallowing, chewing, and biting.
The trigeminal nerve also performs the sensational functions of touch and pain temperature.

The trigeminal nerve is the biggest cranial nerve and has sensory as well as motor divisions. The motor section of the trigeminal nerve has a nucleus point situated in the pons, innervating the masticating muscles and also the tensor muscle in the tympanic membranes of the ear. 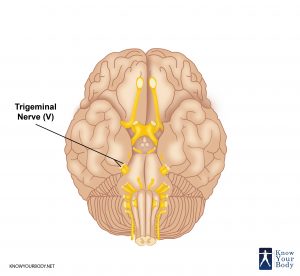 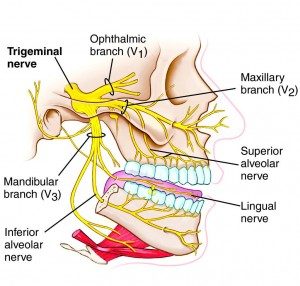 To Test the Sensory Supply

For this, ask the patient to shut their eyes and introduce a cotton ball to the areas of the face, which is supplied by the three sections of the trigeminal nerve. This will help detect the tactile sensory ability. Also, the corner of one eye is touched with a cotton ball and in normal situations, it must have a blinking response.

To Test the Motor Supply

For this, the patient must clench the teeth tight and symmetrically. If the trigeminal nerve has weakness in the motor nerve then the jawline will shift from the weak side. Also, the teeth will not be in proper alignment.

To Test the Corneal Reflex

For this, you need to require a competent ophthalmic branch and test the zygomatic and temporal branches of the nerves of the face. This tests both the sensory and motor divisions of the cranial nerve. The doctor needs to place the fingertip on the jaw of the patient and tap it lightly with help of a reflex hammer.

Causes of Damage or Injury

A damage or injury to the trigeminal nerve results in the ailment known as Trigeminal Neuralgia. Also known as tic douloureux, it occurs when the function of the trigeminal nerve is disrupted.
The main cause of this ailment is the occurrence of a problem in between a normal blood vessel, which can be a vein or an artery. Due to the disruption or problem, there is a pressure on the nerve, which results in its malfunctioning.
The primary cause of Trigeminal Neuralgia is aging. But it can also result from multiple sclerosis or any similar disorder. Even it can occur because of a tumor or brain lesion compressing the trigeminal nerve.
Other than this, there are numerous triggers that may cause pain to the trigeminal neuralgia, such as touching the face, shaving, brushing teeth, talking, drinking, eating, smiling, washing the face, experiencing a breeze, and even talking.

The ailment caused due to disruption in the trigeminal nerve is known as Trigeminal Neuralgia. It is an extended pain situation that affects the nerves in the face. Individuals suffering from this disease can feel excessive pain even due to light electric shock.
There are three different nerves of the trigeminal nerve and this ailment can affect any of these nerve branches. This means that a person with such a disorder suffers from pain on the forehead or the jawline. Usually, the pain is on one side of the face. If in some cases the pain is on both the sides then this situation is known as bilateral trigeminal neuralgia.

How do doctors test the trigeminal nerve?

The doctors ask the patients that they will be testing their ability to pain on the face or to touch on the face. For this, the eyes are shut down and cotton or a ball of the finger is touched on the face. A light touch on one or both sides is practiced to identify the presence of a trigeminal nerve.

Is trigeminal neuralgia is a fatal ailment?

Trigeminal neuralgia occurs when the routine functioning of the trigeminal nerve is disturbed. The ailment is not fatal, but it is highly painful and irritating.

Is trigeminal nerve motor or sensory?

The trigeminal nerve has three different branches, such as the ophthalmic nerve (sensory), maxillary (sensory), and mandibular branches (motor and sensory).

What are trigeminal ganglia?