By Shoummojit Roy on April 7, 2012 in Skeletal System

It refers to one of the two air-filled cavities in the frontal bone. In Latin, it is also referred to as “Sinus Frontales”.

The frontal sinuses are located within the lamina of the frontal bone. These can be found behind the superciliary arches, between the bones of the skull and face. Frontal Sinuses are membranous and are lined by mucosa. Their shape and size vary among individuals. Usually, these are absent at the time of birth. However, they are often found to be quite well developed by the time an individual reaches his or her seventh and eighth years. The sinuses attain full size after puberty. The bone tissue begins to ossify only at about two years of age. Until then, a recess can rarely be detected. Naturally, this structure is not apparent on radiograph images before that time.

These sinuses are mostly asymmetrical. The septum present between them often diverts to either side of the middle line. While the development of sinus begins in the womb, only the ethmoid, and maxillary sinuses are found to be present at birth. Around 5% of individuals are seen to have an absence of frontal sinuses.

On an average, the sinuses measure 28 mm (height) by 24 mm (breadth) by 20 mm (depth). These make up a space of 6-7 ml. Each of the sinuses opens into the anterior section of the matching middle meatus of the nose. They open through the frontonasal duct which crosses the anterior segment of the ethmoid labyrinth. Then, these structures open into the hiatus semilunaris situated in the middle meatus.

The Frontal Sinuses drain through the Ethmoid Sinuses into the nose. The sinus, through its rich mucus production, is an important part of the air filtration system of the nose. Thus, it serves as an essential component of the immune defense. Sinal and Nasal mucosae comprise of cilia that help transport mucus to the choanae and ultimately to the stomach. The thick upper layers of nasal mucus contain sufficient amounts of antibacterial proteins, antibodies, and immune cells and serve to trap bacteria as well as other tiny particles that try to enter the body through the nose. The thinner layers located underneath provide a substrate where the cilia can move and use its debris to make the upper layer move towards the choanae through the ostia.

Due to its closeness to the orbit and cranial cavity, inflammation of the frontal sinus may also cause other severe complications part of Frontal Sinusitis. These include disorders like: 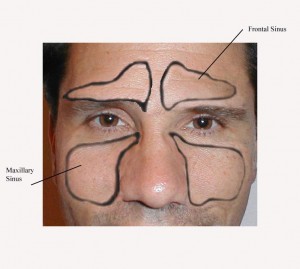 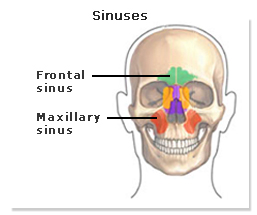