By Anirudh Agarwal on April 5, 2018 in Cardiovascular System 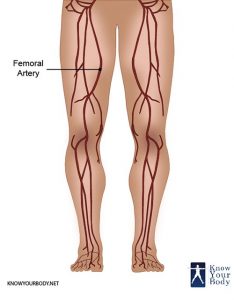 The femoral artery is a continuation of the external iliac artery. It crosses under the inguinal ligament and enters the femoral triangle where the profunda femoris artery arises from its lateral side. This artery travels both posteriorly and distally, and branches out into three.

Branches of the Femoral Artery

Functions of the Femoral Artery

The main function of the femoral artery is to supply oxygenated blood to the tissues of the thigh region as well as the lower section of the body.
The femoral artery can be palpated through the skin. Therefore, it is often used as an artery for catheter access when any medical intervention is needed. Depending on the need, the clinician will choose whether the right or the left femoral artery needs to be accessed.
When the blood pressure of the person drops, sometimes the radial and brachial arteries cannot be located. Clinicians often draw blood from the femoral artery during this time.

Due to cigarette smoking and consumption of fatty foods, the arteries can get clogged. When the femoral artery narrows as a result of this, it could result in peripheral arterial disease. This causes pain to the legs, especially during walking. If this artery is blocked due to atherosclerosis, surgery might be required. The doctor may perform an endarterectomy if the buildup of arterial plaque is too much. If it is not too severe, the condition can improve with rest and an exercise program.

A femoral hernia is very uncommon. This occurs when a part of the bowel pushes through the groin at the top of the thigh. Apart from the pain, it causes vomiting and stomach pain. It occurs frequently in women due to the wider pelvis. Usually, a surgery will be required to push the bulged portion back.

Can the femoral artery be easily palpated?

Yes, it can be as the femoral artery is accessible within the femoral triangle easily. The femoral artery can be palpated between the pubic symphysis and the anterior superior iliac spine. It is the easiest artery that can be accessed for major medical emergencies compared to other major arteries of the body.

Is the femoral artery vulnerable to lacerations?

Yes, the femoral artery is prone to lacerations because of its superficial position within the femoral triangle. If the lacerated artery is not treated immediately, it could prove dangerous. Immediate first aid must be given and the person needs medical attention.

How deep is the femoral artery?

This depends on the weight and amount of fat in a person. For a thin individual, the femoral artery is about an inch into the skin. But for a person with more fat, the adipose tissues tend to be thick and the femoral artery can be several inches under the skin.

What is the importance of the profunda femoris?

How fatal is the bleeding from a cut in the femoral artery?

The loss of blood can make one lose consciousness depending on how deep the cut is. If an immediate pressure is applied and a tourniquet is applied as well, the bleeding may be minimized. If the bleeding is too much, the doctor may need to put a clamp on the cut to seal the artery till surgery has to be performed.

The femoral artery is the main artery that supplies blood to the tissues of the thigh. It can be easily palpated; therefore it is used to draw blood from in case of medical emergencies. In case of accidental bleeding from the femoral artery, it is important to get the person immediate medical assistance as the bleeding can be fatal.