By Anirudh Agarwal on April 5, 2018 in Skeletal System

The leg bones are among the strongest bones in the human body. They include the tibia, the femur, and the fibula. The tibia is the second largest bone found in the body after the femur bone in the human anatomy. It is also known as the shinbone. 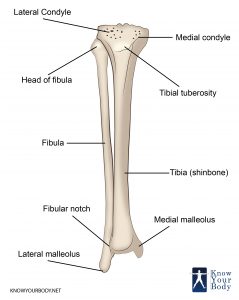 Tibia is the main bone of leg that forms the shin. It expands at the distal ends and proximal, articulating at the ankle and knee joint respectively.

It is the second biggest bone in the body because of its function of weight bearing. Tibia is widened by the lateral condyles and medial at the proximal end. This supports in weight bearing. It links the condyles from the flat surface, called tibial plateau. Its structure articulated from the femoral condyles to create major articulation from the knee joint.

It is situated between the condyles in an area known as intercondylar eminence. It comprises a rough area and two tubercles. The area is the main point of attachment for menisci and ligaments of the knee joint. The tibial intercondylar tubercles fit well into the intercondylar fossa of the femur.

From the anterior surface of the proximal tibia, the tibial tuberosity is located. It is the area where patella ligament links.

The Tibia shaft comprises three surfaces and three borders – posterior, anterior and lateral. For brevity, just the clinical and anatomical importance of surfaces and borders are mentioned here.

The end of the tibia is the distal end that widens to support weight bearing. Any projection of body continuing inferiorly from the medial side is known as medial malleolus. It begins with the tarsal bones to create part of ankle joint. From the posterior surface, there is a small groove. The tendon of tibialis muscle moves through the groove. Laterally, on the distal end, where fibula is linked to the tibia is called as the fibular notch.

Similar to other bones, even tibia holds an upper end, a lower end, and a shaft.

This part of Tibia is markedly expanded from the sides and from two huge condyles that overhang from the posterior surface of the shaft. The intercondylar part is the region between two condyles. From the lower anteriority, tuberosity is present.

This part is bigger than the lateral condyle. The superior surface of this part articulates with femur’s medial condyle. The articular region is oval and the long axis is anteroposterior.

The articular area holds a raised medial margin that covers the lateral intercondylar tubercle. The posteroinferior part of the lateral condyle holds a circular, flat facet and is directed downwards, lateral, and backward. This facet moves with the fibula. The groove marks the posterior surface of condyle superomedial to the fibular facet.

It is a rough area on the superior surface between the articular areas of two condyles. The surface is smallest in the middle section. This part is augmented to from the intercondylar eminence that is flanked by the lateral and medial intercondylar tubercles.

The tibia is supplied with blood by a nutrient artery which is the main vascular supply and by the periosteal vessels from the anterior tibial artery.

The tibia can get fractured in many ways. If it is a stable fracture, the broken ends of the tibia get aligned and heal. In a displaced fracture, the broken ends are separated and do not align and often requires surgery. A transverse fracture has a horizontal line of fracture and is unstable. An oblique fracture usually occurs in an angular pattern and can become more out of alignment with the passage of time. A spiral fracture is one that is caused by a twist such as falling down a spiral staircase.

When the broken bones come out of the skin, it is called an open fracture and when they do not come out, it is called a closed fracture. Open fractures are usually caused by accidents where the tibia pushes through the skin. They damage the surrounding tissues, muscles, and tendons more. They take a longer time to heal as there are many complications. In closed fractures, the internal tissues can still be damaged and if they swell up, they can cut vascular supply which may result in amputation.

The doctor must be informed about what exactly caused the fracture and whether any other injuries were sustained. This is because tibia fractures are of many kinds. After conducting a close examination and obtaining a thorough knowledge of medical history, the doctor will suggest the treatment modality. For simple fractures, the patient will have to be with a leg cast for a month and then a below knee cast for another 6 weeks. For more intense fractures, an intramedullary nail is inserted into the tibia to hold the fracture in place. This is often removed after 3-6 months. Physiotherapy is often considered here. Serious fractures may need to be treated surgically. There are greater immobility and recovery can go on for longer than a year.

How is the shaft of the tibia?

What is the fibia? Is it the same as the fibula?

The fibia is the flat part of the tibia and is often confused with the fibula. But they are two different structures.

What are the joints associated with the tibia?

The tibia is associated with four joints in total – the knee joint, the ankle joint and the superior and inferior tibiofibular joint. As the tibia is articulated with these joints, it helps in the necessary muscle movements involving these joints.

What are the names of some of the tibia fractures?

Some of the commonly known tibia fractures are the Segond fracture, the Gosselin fracture, the Bumper fracture and the Pott’s fracture. Most of these are caused due to various reasons such as accidents or falling or some sort of trauma and have other accompanying biological conditions as well. They are treated according to their severity and also according to what caused the fracture.

The tibia or the shinbone is the second largest bone in the body after the femur bone. It is largely responsible for muscle movement and in distributing and supporting the body weight of the person equally. Tibia fractures are of many kinds and treatment is according to the fracture.