By Anirudh Agarwal on April 7, 2018 in Digestive System

The digestive system in human beings is one of the major controlling organ systems. With the incorporation of a number of organs, the system collectively controls the breakdown of the complex nutrient molecules into simple absorbable forms. All the organs perform differently but in a well-coordinated manner.

One of the small-sized yet important organs of the digestive system is the gallbladder.

What is the Gallbladder?

The gallbladder is present in all the species belonging to the chordate phylum of the Animalia kingdom. It is a hollow pouch-like organ which is concerned with the digestion process.

In human beings, this slightly elongated organ is pear-shaped, sitting below the liver. It stores the bile juice and makes it concentrated before releasing it into the duodenum for further digestion.

Location of the Gallbladder

The small pouch-shaped organ is located just below the liver and above the duodenum. The liver hides a small portion of the organ in the posterior region. 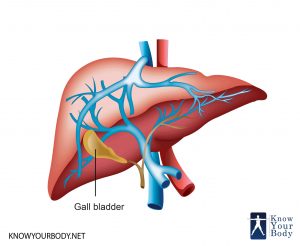 Parts of the Gallbladder

The four-inch organ is divided into the following parts:

An adult gallbladder is located almost at the inlet side of the shallow notch of the liver. It is quite small as compared to the nearby organs as it is around 7 to 11 centimeters long while 4 cm wide. These measurements are an approximate value and are assumed to the dimension of the pouch when it is fully distended.

The structure of the gallbladder is quite typical as it resembles the pear fruit.

The internal anatomy of the gallbladder is little more complex owing to the various layers of the muscle fibers.

The main function of the pouched organ is to store bile till the cholecystokinin induces the contraction of the bladder walls and secretes the stored bile in the CBT.

Bile is important for:

Bile is only released when food enters the esophagus. Till then the juice needs to be stored somewhere. This is done by the gallbladder. Upon receiving the neurogenic impulse, the muscular layer of the gallbladder contracts, thereby releasing the bile in the CBT.

Origin of the Gallbladder

The origin of the gallbladder is tracked down to the theory of the embryonic development of the zygote. After the fourth week of the embryogenic development process, the stomach has taken its place. the small intestine gives birth to a pouch-like outgrowth on the right side. This outgrowth is known as the hepatic diverticulum.

Below this biliary tree precursor, another small outgrowth is located. It is known as a cystic diverticulum. It is from this pouch, the gallbladder develops later through tissue differentiation and somatic cell division.

The nerves that innervate the gallbladder are: 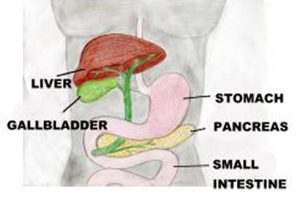 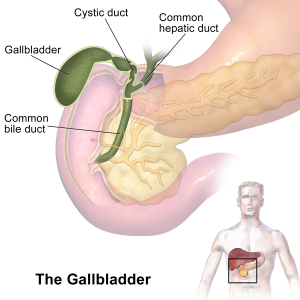 Following are the clinical conditions of the gallbladder:

Gallstones are a condition where excess presence or bilirubin or cholesterol in the bile causes its saturation. This saturated bile finally turns into stones of varying in size. Gallstones can cause a number of problems since the gallbladder is linked to a number of important organs.

Inflammation of the gallbladder occurs due to two main reasons:

Symptoms are fever and pain in the right side of the stomach. Antibiotics are given for reducing the inflammations.

REMOVAL OF THE GALLBLADDER

In this case, due to recurrent gallstone appearance or some other problems, the gallbladder is removed from the neck to the fundus. This condition is termed as cholecystectomy.

It is either done as open-wound surgery or through the microscopic, laparoscopic surgery.

Cancer occurring in the gallbladder is quite uncommon and mostly occurs in late life. It can be caused because of:

Why is gallbladder important?

The gallbladder is the storehouse of the bile juice. It is important because bile is not secreted only when food enters our system. Rather, liver continuously produces the juice and stores it in the gallbladder.

Gallstones are normally not harmful because saturation of bile occurs frequently. But if the problem persists and someone is experiencing sharp pain on the right side of the abdomen, then gallstones need to be removed.

This is quite controversial. The recurrence of the gallstones depends upon a number of factors. So that should be diagnosed by the doctor himself.

How are gallstones tracked?

Gallstones are generally examined through ultrasounds. Also, liver function tests and other blood test are done for seeing the extent of the infection.

What side of the body is your Gallbladder located?

It is located on the right side of your body under the liver.

What does the Gallbladder do?

Gallbladder helps in digesting the fat by making the bile concentrated and storing it as well.

Does pain on the right side of the abdomen means that gallbladder is infected?

There are a number of organs on the right side. Pain in that part does not signify that the gallbladder is the epicenter of the pain. Only a proper diagnosis can reveal the truth behind the pain.