By Anirudh Agarwal on September 2, 2017 in Cardiovascular System

What is the Mitral valve? 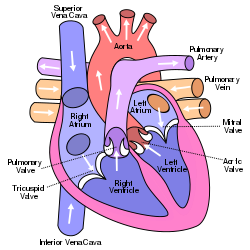 The heart comprises of four different valves. The mitral valve is located obliquely in the aortic valve and is in general 5-6 cm2 in area and connects left atrium to the left ventricle. The mitral valve functions in accordance with its 5 different structural components, which are:

2. Mitral Leaflets: The mitral valve comprises of the two leaflets also known as the anterior and posterior leaflet. Both the leaflets comprise of various indentations on their free edges. There are two specific indentations called as anterolateral and posteromedial commissure. These two commissures divide the leaflets into two different types known as the anterior and the posterior leaflets.
3. Commissures: The area located at the junction of the two anterior and posterior leaflets is often called as commissures. The commissural chordae are the fibrous string that inserts into the area between the two leaflets of the mitral valve.
4. Chordae tendineae: These are the small muscular fibrous strings originating from the papillary muscles or sometimes from the left ventricular valve. These muscular fibrous strings further insert into the mitral wall leaflets. 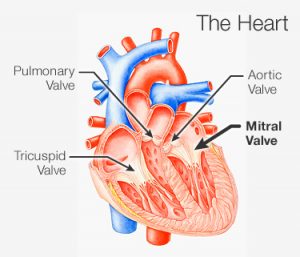 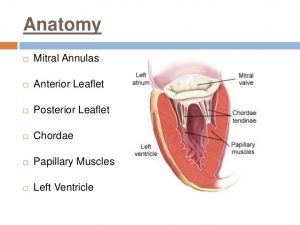 What is Mitral valve disease?

Any sort of malfunctioning in the mitral valve may result in the reverse flow of the blood into the left atrium, because of which the patient may experience various kinds of symptoms like tiredness, dizziness, and shortness of breath. Furthermore, the ill-functioning of the mitral valve may also result, in inhibiting the regular amount of blood flow from the left ventricle of the heart, thus depriving the body of the regular supply of the oxygen-filled blood. This may result in various life-threatening diseases like heart failure, arrhythmias, irregular heartbeats and several others.

The various heart valve diseases are often differentiated on the basis of the dysfunction of the valve involved. The mitral valve is supposed to be the most complex in structure among the four different heart valves and thus, is also the one, which is most frequently associated with the various disorders.

In general, there are three different types of Mitral valve diseases:

Mitral Valve Prolapse: This condition occurs when the two leaflets or the cusps associated with the mitral valve bulge out into the left atrium, instead of properly closing evenly together. This may be caused due to enlarged leaflets or cusps. This condition is often referred to as the click-murmur syndrome, because of the clicking or murmur sound associated with it, when the blood flow suddenly stops when the mitral valves close after atrium contraction.

Mitral valve regurgitation: This occurs due to the leaking of the blood from the valves, resulting in the backflow of blood into the left atrium instead of the left ventricle, during the ventricular compression. If the situation persists for long, may result in the enlargement of the heart or increased pressure build up in the lungs due to the backflow of the blood.

Causes and Symptoms Associated with the Mitral Valve Disorders:

Mitral Valve Stenosis: The most common cause of the mitral valve stenosis in most of the cases is the history of rheumatoid fever in the patient during their early years of childhood. Apart from rheumatoid fever any other factor which may cause narrowing of valves like calcium deposition or aging may be responsible for causing mitral stenosis.

Mitral Valve Prolapse: Mitral valve Prolapse occurs due to enlargement of the leaflets or the cusps of the valve. There is no specific cause associated with this disorder and is supposed to be more widely occurring valve disorder.

Often this is found to be running in families and may be found associated with connective tissue disorders, scoliosis, and Marfan syndrome, etc. The symptoms associated are similar to the other valve disorder and the person may experience shortness of breath, fatigue, coughing, heart palpitations and chest pain.

Depending on the various symptoms, if the doctor suspects any kind of heart valve diseases, he may first try to study the heartbeat pattern of the person using a stethoscope. Any difference in heartbeat pattern may help in diagnosing the kind of mitral valve disorder. Apart from heartbeat studies, there are various other tests that may be performed like:

Medicines: As such, there is no medicine to improve the structural limitation of the mitral valve. However, in certain cases medicines may be administered to relieve the symptoms or to suppress the effect. Few drugs that are often prescribed:

Valvuloplasty Technique: In extreme conditions, certain medical procedures may be used to combat the effects due to structural changes in the mitral valve. For example, in the case of mitral stenosis, where the valves get narrow or blockage occurs, balloon valvuloplasty may be used. In this technique, a balloon is used to open up the blocked valve.

What are the general symptoms associated with defective Mitral Valve?

In general, most of the time, the mitral valve disorders go unnoticed, as many of the patients do not show any symptoms, even when the leak in the mitral valve may be severe. In extreme conditions, the patient may experience shortness of breath, fatigue, and tiredness, coughing and chest pain.

What may be the indications for a surgical treatment for the defective mitral valve?

Surgery is considered as an option for the patients who have severe leaking in the Mitral valve. The leaking is usually measured on a scale of 0-4, where 3 represents moderately severe and 4 represents extremely severe condition. Surgery may also be required when the patient is diagnosed with an increase in heart size, irregular heartbeats, and a decrease in the heart activity and blood flow.

What are the risks associated with Mitral valve surgery?

Usually, the surgical treatment improves the long-term survival of the patients suffering from severe mitral valve diseases. The risks associated with mitral valve surgery for asymptomatic patients in 1 in 1000. In 95 % of the cases, surgical treatment has been found to be successful in patients suffering from congenital mitral valve disorders. Having previous heart disease history or coronary artery disease may attribute to an individual risk associated with the surgery. In general, 95 % of the patients do not require to be re-operated for at least another 10 years.