By Madhulima Acharya on May 13, 2013 in Digestive System

It is a small constriction at the lower end of the stomach that directly opens into the duodenum. The aperture generally marks the end of the stomach and the beginning of the small intestine. It is often mistaken as keratosis pilaris, a common, autosomal dominant condition marked by rough, red, bumps on the skin. 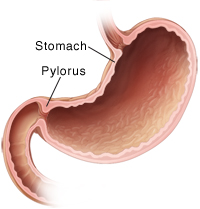 As aforementioned, the passage is located in the upper abdomen. The exact location of the Pylorus is marked by a circular groove on the surface of the stomach, which is the duodenopyloric constriction.

In simple words, the strong ring (also known as the Pyloric valve or sphincter) is composed of smooth muscles positioned at the end of the pyloric canal that allows food to get transferred from the stomach to the duodenum.

It is a cone-shaped structure covered with a mucous-membrane lining that consists of the following parts:

At the end of the opening between the stomach and the small intestine, there is a compact ring of smooth muscle or valve, called pyloric sphincter. Thickening of the lower region of the pyloric canal gives rise to this structure. It clearly separates the stomach from the duodenum by closing the natural orifice whenever required. The pyloric valve is innervated by the sympathetic nerve called celiac ganglion in the upper abdomen.

The inner surface of the aperture is lined with gastric mucosa, which secretes gastric juices to promote digestion. The mucosa is normally covered with thick mucus secreted by the columnar epithelial cells. It chiefly serves the following two purposes:

The primary function of the cone-shaped constriction is to prevent regurgitation of food from the small intestine. It also aids in the proper movement of the undigested food through the intestinal tract. The pyloric sphincter opens periodically to permit small quantities of well-emulsified food to enter the duodenum. Once the duodenal region is completely filled, the pyloric valve contracts and shuts off due to increase in pressure. The food is pushed deeper into the remaining portions of the intestine with the help of peristaltic waves in the duodenum.

The small circular opening is often affected with pyloric stenosis. In this condition, the aperture undergoes narrowing due to progressive thickening of the pyloric canal, causing uncontrollable vomiting and abdominal pain. The condition is common in infants that involve thickening of the pylorus muscles, thus preventing food from entering the small intestine. Presence of tumours in the pyloric canal can also block the aperture and cause severe discomfort. Pancreaticoduodenectomy/Pancreatoduodenectomy/Whipple procedure is a common surgical procedure used to remove these lesions. Pylorus-sparing/preserving pancreaticoduodenectomy, the modified version of this method, is chosen by most doctors in order to preserve the aperture and promote normal gastric emptying.

In some instances, the conical passage may remain in a patulous/open state to allow the passage of food into the intestine before the completion of gastric digestion. This occurs due to pyloric spasm in which the sphincter undergoes a sudden, involuntary contraction. A deformed aperture can also be the cause of acid reflux. Helicobacter pylorus (H. pylori) is a bacterium that causes chronic inflammation of the inner lining of the stomach and subsequent formation of ulcers. A broad spectrum of antibiotics is needed to treat this condition. Other associated clinical distress caused to the Pylorus includes Pyloric tumours and Pyloric gland adenoma.

Symptoms of Pyloric stenosis are noticeable within 3-4 weeks of a baby is born. The condition is, however, rare in babies older than 3 months. The signs and symptoms incorporate:

The symptoms related to pyloric valve tumour or stomach polyps are an indication of stomach cancer. They include:

Pyloric stenosis is not present at birth but it has the tendency to develop afterwards. Although its actual reason is not known, the reasons are mostly attributed to environmental and genetic factors. These are:

The causes of stomach polyps or tumours in the pyloric valves are as follows:

The diagnostic procedures for Pyloric stenosis are:

The diagnosis carried out for stomach polyps or pyloric tumours or adenomas are:

The treatment carried out for Pyloric stenosis is a minimally invasive surgery. It is done by cutting the thickened pylorus muscle and creating more space for the food to pass to the small intestine. This procedure is quicker and the recovery time is much shorter than any traditional surgical treatment.

On the other hand, the types of treatments carried out for stomach polyps or pyloric tumours include these:

Any medical condition that may carry a serious threat in the future should be treated on time. Therefore, whether it is pyloric stenosis or pyloric tumours, the respective disease should be treated accordingly to ensure the safety of the patients. 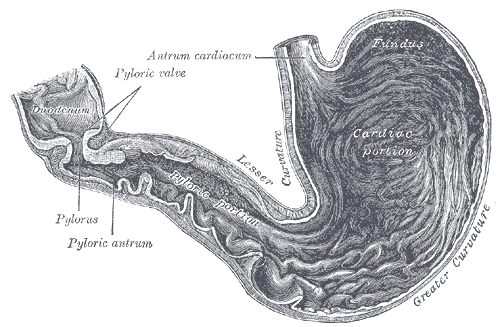 One Response to Pylorus