By Shoummojit Roy on May 18, 2012 in Integumentary System

It refers to a tiny epithelium band that stretches onto the nail base from the posterior section of the nail. It is actually the terminal point of the proximal fold that rolls back to cast off an epidermal skin layer over a nail plate that has been formed freshly.

It is frequently and mistakenly referred to as “cuticle” or “proximal fold”.

It is the thick skin layer that surrounds the nails of the fingers and the toes. It gets itself attached to the nail plate closely. It moves with the plate as the latter grows.

It mainly acts as a protective barrier for the region between the nail and the epidermis. It resists the entry of bacteria and other microbes and prevents infection of the nail matrix. In hoofed animals, it functions as a short hoof in fetuses and newborns.

Though the Eponychium and cuticle are used as interchangeable terms, there are some facts that prove that the two terms may be similar but not the same. The former is the living tissue that is present at the base of your nail while the cuticle i.e. the true one is the dead tissue that develops onto the nail plate of an individual. You can definitely nip or remove your cuticles but you should never cut your eponychium. You can rather push it back with proper care to make sure the seal surrounding the nail is not broken.

Get an idea of the location and appearance of this nail structure with the aid of these carefully chosen images. 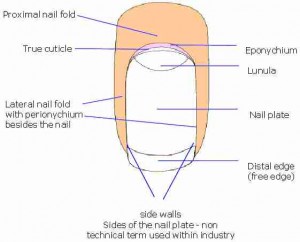 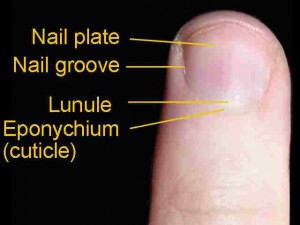