By Anirudh Agarwal on April 6, 2018 in Skeletal System

The upper extremity of the human beings has the largest number of bones. This part of the skeleton varies from being simple to complex. The various articulations and the different structures allow the multifarious movements of the hand. Amongst the parts of the upper extremity, the wrist is one of the complex parts in terms of structure and functionality. The wrist bone is biologically known as the carpal bones and is the connection between the fixed part and the hanging part of the arm.

The carpal bones differ in structure, function and in articulation also.

What are Carpal Bones and how many are there?

Wrist bone is the collective name of the carpal bones in our upper extremity. Eight bones form the juncture between the forearm and the hands. The eight bones in the wrist are named as:

These eight bones are arranged in the form of distal and proximal rows. Each row consists of four bones namely:

The transverse rows give the wrist its unique shape. The wrist bone is concave in shape in the distal region whereas the proximal surface shows convexity.

The eight bones can also be arranged in the form of longitudinal columns. They are three in number namely:

Location of the Carpal Bones

The carpal bone is located in the upper extremity of the human skeleton. The bones are the joining bridge between the ulna and radius and the metacarpals. The radius is articulated with the wrist bone on the proximal side. The metacarpals are articulated on the distal surface of the carpal bones. 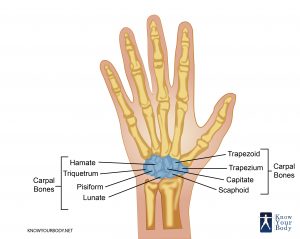 The locations of the eight bones are as follows:

The structure of the eight carpal bones varies from one another, with having a different number of flat faces for the articulation of other bones.

Structure of the trapezoid

Structure of the capitate

Structure of the hamate

Functions of the Carpal Bones

The functions of the carpal bones can be divided into two parts:

The eight bones are connected with each other and with the other bones with the help of ligaments. These ligaments are divided into three groups:

The common clinical signs that can be seen in all the eight bones are fractures and the development of osteoarthritis. However, there are certain specific diseases too associated with the carpal bones. They are:

What are Carpal Bones?

The wrist comprises eight small bones referred as carpal bones along with two long bones located in the forearm known as radius and ulna. The carpal bone that is prone to injury the most include the scaphoid bone, lying in proximity to the thumb’s base.

What are the functions of the carpal bones?

What are the muscles that remain attached to the carpal bones?

The muscle is known as the Flexor Retinaculum, which is an accessory ligament. It is made of the deep fascia lying at the wrist’s palmar surface. It remains attached hook of the hamate and the pisiform in a medial direction.  It joins the trapezium and the scaphoid in a lateral manner.

What are the joints in the carpal bones?

What is Carpal Tunnel Syndrome?

It is a disorder causing immense pain and numbness in the wrist and the hand.   The symptoms arise while doing day-to-day activities like holding a telephone, driving a car and even reading a newspaper. The main reason for that dysfunction is due to the increase of pressure in the median nerve of the wrist.