By Shoummojit Roy on September 19, 2012 in Female Reproductive System

What is Clitoral glans?

It refers to an external section of the Clitoris or the female sexual organ. It is also known by the names ‘Clitoris of the glans’. In Latin, it is referred to as ‘Glans clitoridis’. It is called ‘Gland du clitoris’ in French.

The structure is about the shape and size of a pea. However, it can be quite larger or smaller in appearance. It is extremely sensitive and contains a similar number of nerve endings as the Glans penis in males, although concentrated in a shorter space. This makes it especially suitable for sexual stimulation. At the time of stimulation, the Glans clitoridis gets filled with blood and sometimes protrudes under the clitoral hood or outside it.

The Clitoris of the glans is covered by the clitoral hood and affixed to the Frenulum clitoridis, both of which are external and joined to the Labia minora – the two inner folds of the vulva (external female genital sections).

These useful images would help you understand how this female genital section appears to view. 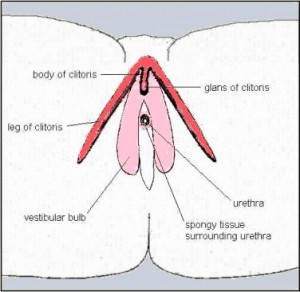 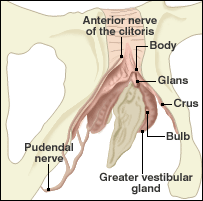