By Shoummojit Roy on May 2, 2012 in Muscular System

It refers to one of the three eyelid muscles. It is also known as Corrugator. It is small, narrow and shaped like a pyramid.

It is located under the Frontalis muscle and just higher than the Orbicularis oculi.

It originates from the medial endpoint of the superciliary arch. Its fibres pass in an upward direction and also laterally, between the orbital and palpebral sections of the Orbicularis oculi. The fibres are inserted into the deeper skin surface, higher than the medial section of the orbital arch.

These muscles acquire separate position from the frontal and eyelid orbicular muscles. The innervations in them are observed to begin from a temporal filler branch with no sign of zygomatic branch association. The average distance between the motor point and the midfrontal line is 13 mm.

The filler branch is responsible for making the corrugators supercilii move in a parallel line to the supraorbital edge, thereby maintaining a distance of 3 mm below and 13 mm above the edges. Exploring the structure will bring you to multiple fillet connections that have trigeminus nerve branches following the supraorbital foramen.

These muscles offer the most attractive structure to the eyebrows. They draw them medially, thereby forming the vertical furrows on the brows. You get a frowning expression because of the presence of these muscles. Next to the nasal bone is the frontal bone to which the corrugator supercilii gets attached. The fibres run laterally and superiorly and get attached to the skin that is present above the eyebrows.

It is referred to as the “frowning” muscle, simply because it helps create a similar expression. It is the primary muscle that is used by actors while depicting the expression of suffering. It helps to pull the eyebrow down and to a medial position, thus making vertical wrinkles appear on the forehead. The muscle also contracts to help humans avoid the high glare of the sun. It does this by pulling the eyebrows towards the nose bridge, thus creating a roof over the region above the medial eye corner. It is responsible for the furrows on the forehead that helps protect the eyes naturally from direct glare of sunlight.

The muscle is involved in conditions, such as Thyroid eye disease. Botulinum toxin is typically injected into this muscle for the treatment of this disorder. It may also be numbed with Botox injection or even surgically removed to prevent the occurrence of some acute migraine headaches.

Check out some useful images of this muscle to know how this physical structure appears to view. 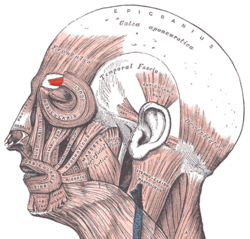 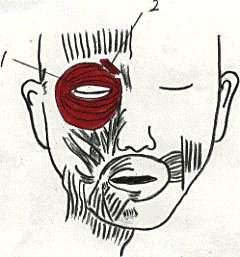