By Shoummojit Roy on March 29, 2012 in Integumentary System

It refers to the formative cellular layer that is present at the base of the nail of the toe or finger. This is the Germinal Matrix or tissue on which the nail lies. This tissue comprises of skin cells that divide quickly and are rapidly filled with keratin, a fibrous scleroprotein. The nail matrix forms a part of the Stratum Germinativum layer of the epidermis. The skin cells of the fingernails grow at a speed that is four times faster than that of the toenails which grow about 3 mm every month. 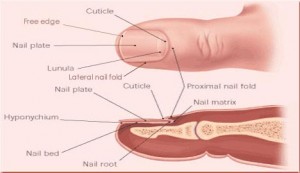 It is located under the cuticle at the stem of the nail. It extends beneath the root of the nail and comprises of lymph, nerves and blood vessels.

It is also known by various other names like:

The nail is actually produced by the cells in the germinal matrix. It is the matrix which is actually responsible for the manufacturing of the cells that turn into the nail plate or actual body of the nail. The thickness and width of the plate are determined by the length, thickness, and size of the matrix. According to certain anatomists, the nail matrix is the only section of which rests the root of the nail.

The matrix is highly sensitive and displays many longitudinal ridges over its surface.

Conditions of the nail matrix are visible within the plate of the nail. These include disorders, such as:

These are pigmented, vertical bands that are frequently described as ‘moles’ of the nail. These typically develop in the germinal matrix and can be an indication of a malignant lesion or melanoma. Dark streaks are fairly common in individuals with dark skin and may arise normally. 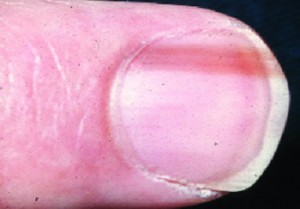 Beginning in the nail matrix, subungual melanoma is one of the types of melanoma affecting nails. Although subungual melanoma is comparatively a rare type of skin cancer, if left untreated it can cause serious complications including metastasizing of cancer or spread to other body parts. Hence, early detection and treatment is a must.

Symptoms of subungual melanoma are as follows:

Exposure to the sun is found to be one of the leading causes of the subungual melanoma and hence dermatologists advice caution against unprotected sun exposure and tanning. However, in some cases,  subungual melanoma is also caused by trauma or injury. It usually affects older and middle-aged people with darker skin.

A biopsy is usually carried out to diagnose subungual melanoma. A punch biopsy is a procedure involving a sharp-edged tube-like instrument that helps in collecting small samples that need to be tested for melanoma. The biopsy is also essential to rule out any other underlying conditions like a fungal infection.

An early diagnosis is necessary for treating subungual melanoma. With survival rate estimated to be an average of 5-year in 16 to 80 percent of people, such a wide percentile associated with the timing of diagnosis and also considers late diagnosis due to a host of factors like misdiagnosis.

Surgery is the only standard and viable treatment procedure for subungual melanoma. Initially, the entire nail is excised and then followed by the excision of the abnormal growth. Early treatment not only aids in cessation and preventing the spread of melanoma.

The condition is characterized by an inward turning of the skin over the plate. It generally occurs due to damage or trauma (injury) to the matrix as a consequence of a deep cut to the nail plate or a surgical procedure. The disease leads to a loss of the plate as a result of scar tissue formation. The development of scar tissue can be prevented with the help of Cortisone. It is recommended not to make an attempt to remove Pterygium. Rather, patients with this disease should consult a doctor for proper advice and treatment.

The condition affects the matrix and is visible as longitudinal brown strips in the nail bed.

The condition causes swelling of the tissue surrounding the fingernail and leads to a build-up of pus between the matrix and the cuticle. The region may get red, tender and swollen. Acute Paronychia usually results from bacterial infection, especially by Staphylococcus aureus. Chronic Paronychia may be related to Psoriasis or Eczema.

Paronychia can also be caused by the following conditions:

If there is a formation of an abscess, it is usually drained by making an incision and followed by a drainage procedure. Warm soaks are advised even after the procedure. Antibiotics are usually prescribed if the infection spreads to the finger from the nail bed area. However, sometimes a topical antibiotic like Bacitracin are prescribed.

Following are the ways to prevent paronychia:

The matrix remains in a healthy condition and continues to grow so long as it gets adequate nutrition. A well-nourished matrix has a healthy nail plate over it. Once new nail plate cells develop, they come out from the matrix as white and round surfaces. The new plate cells push up the older cells which look flat and translucent in appearance.

Dystrophic onychomycosis treatment includes surgical or chemical avulsion of the nail plate along with systemic or topical treatment with medications like terbinafine and itraconazole might be recommended.