By Shoummojit Roy on November 10, 2011 in Lymphatic System

What is Sentinel Lymph Node?

The term “sentinel” comes from the French word “sentinelle”, which stands for “vigilance” or “guarding over”. The name refers to the fact that the node acts as the first filter of harmful components such as melanoma. 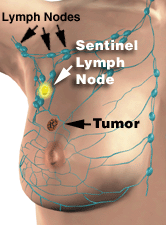 In patients of breast cancer, this node is generally located in the lymph nodes under the arm (also referred to as “Axillary nodes”).

It is a surgical process used by doctors in staging, i.e., determining the extent of dispersion of some forms of cancer in individuals who have recently been detected with cancer. This operative procedure is most commonly related to staging breast cancer but is also used commonly for staging malignant melanoma (a form of skin cancer).

During the process, a surgeon typically removes 1-5 sentinel lymph nodes. If breast cancer is involved, nodes may be removed from an underarm. A sentinel lymph node sampling is then sent for pathological examination to ascertain whether cancerous cells have spread to them. In case cancer cells are detected in these nodes, a metastasis of cancer (dispersion throughout the body) can be confirmed. It is due to this reason that a sentinel node biopsy is considered important by doctors in determining the type of treatment necessary for curing cancer as well as deciding the prognosis for the patient.

It is a comparatively new technique used in breast cancer and helps exactly identify the first few lymph nodes (“sentinel nodes”) into which a tumor drains. The method helps surgeons remove only those lymphatic nodes that are most likely to comprise of cancerous cells.

The sentinel nodes are believed to be the first spot where cancer has the potential to spread. In breast cancer, these are generally located under the arm, in the axillary nodes. In uncommon cases, the node may be detected at some other spot in the lymph system of the breast. If the sentinel node tests negative there may be other negative nodes upstream. Similarly, a positive node can be indicative of cancerous upstream nodes.

When a mastectomy or lumpectomy is carried out, sentinel node biopsy is used to remove only a few lymph nodes for laboratory analysis. Lumpectomy refers to the surgical removal of a tumor without taking away a greater number of the surrounding lymph nodes or tissues. It is performed in certain cases of breast cancer. Mastectomy, on the other hand, is the surgical removal of an entire breast that is performed to get rid of a malignant tumor. In traditional mastectomy or lumpectomy, a higher number of the axillary nodes are taken out. This may lead to post-operative complications, such as inflammation or Lymphedema.

Breast cancers initially metastasize in the axillary lymph nodes (lymph nodes in the armpit region). Earlier, lymph nodes consisting of tumors were actively detected and removed with the aid of Axillary Lymph Node Dissection (ALND). The process, though successful, was found to give rise to certain complications. Having fewer lymph nodes was found to significantly enhance the risk of Lymphedema and infections. The surgery also resulted in the snipping of many nerve endings which gave rise to permanent numbness in the shoulder and arms in most patients.

Due to risks of such complications, ALND began to be substituted with a new surgical method known as Sentinel Lymph Node Dissection (SLND) which was found to be more useful in detecting breast cancer. Many women feel that SLND spares them more invasive surgeries and side effects.

This process is conducted on a simple principle, which is removing the node that is most likely to comprise of cancer cells instead of removing and analyzing all the lymph nodes. If the node most suspected to have cancer cells comes clean, the other nodes can safely be assumed to be unaffected in the same way. However, surgeons actually remove a bunch of 2-3 nodes—the sentinel node and the ones nearest to it – while conducting the process. They inject a dye into the area around a tumor to check which lymph nodes directly drain from it. If the first node, or the first few nodes, removed surgically tests negative for cancer the other nodes may also be assumed to have an extremely low risk of having the condition. In such cases, patients do not require an ALND.

However, if sentinel lymph node tests positive, patients must undergo an ALND. The process can help ascertain the current extent of cancer metastasis and reduce its spread at a later stage. However, there is an absence of scientific support for the process as of now.

It is a diagnostic procedure that helps find out whether cancer has metastasized (spread throughout the body) outside the primary tumor and into the lymphatic system. The method is used along with biopsy or dissection of the sentinel lymph node.

The process involves injecting a blue dye and a radioactive tracer into the region surrounding a tumor. The tracer and the dye drain into the sentinel or primary lymph node from the tumor. Together, they mark the location of the sentinel lymph node and make them visible as well audible to surgeons. Surgeons use a hand-held radioactive detector (that resembles a Geiger counter) to scan around the underarm region. A “beep” sound helps them exactly locate the area where the radioactive-filled node is situated. A small incision is made near the area which helps surgeons view the blue-dyed sentinel node and remove it for pathological testing.

Check out some the Sentinel Lymph Node pictures to know more about it. 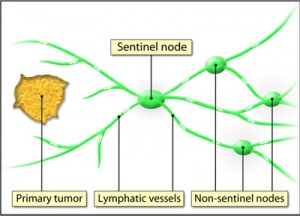 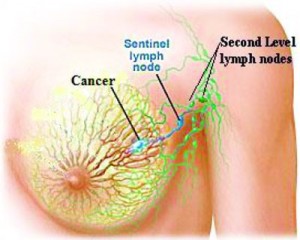