By Shoummojit Roy on January 28, 2013 in Integumentary System

It refers to the basal or the deepest of the five layers of the epidermis. It is also known by the names “germative layer” or “basal layer.” Sometimes, it is also referred to as stratum germinativum.

It is situated between myometrium and the stratum spongiosum.

This epidermal layer comprises only one row of cuboidal or columnar epithelial cells. Half of these cells divide constantly and replace the remaining part of the epidermis that is wearing away. The remaining cells differentiate and go to the next epidermal layer to start the process of maturation.

It forms the outer skin covering in animals. The process of cell division (mitosis) occurs in this layer and replenishes the skin cells.

These keratinocytes present in the stratum basale undergo mitosis, thereby helping in the formation of new cells. The formation of the new ones in the basal layer leads to the gradual pushing the previous cells upward towards the stratum spinosum and through it.

This layer of the epidermis might be involved in various skin disorders, such as Psoriasis and basal cell tumors.

You would find these images useful to know about the appearance of this epidermal layer. 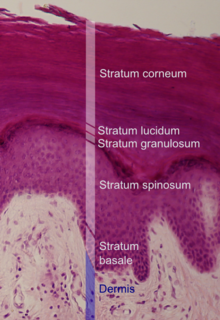 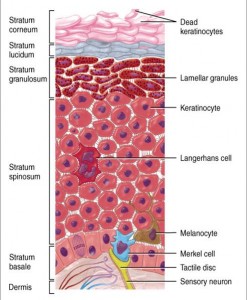