By Shoummojit Roy on January 29, 2013 in Endocrine System

It is a section of the endocrine system that comprises of the posterior lobe of the pituitary gland. It is also known by the name “neurohypophysis.”

It is the rear or posterior part of the pituitary gland, a small gland located in the head (also referred to as the master gland).

It is mainly a cluster of axons or neuronal projections that extend from the neural structure known as the hypothalamus. It is primarily classified into:

This section comprises of the most part of the neurohypophysis. It stores vasopressin and oxytocin. It is sometimes mistakenly equated with the Posterior pituitary. It contains the pituicytes and the Herring bodies.

It is also referred to as the pituitary stalk or infundibulum. It joins the hypophyseal and the hypothalamic systems.

It is included as part of the neurohypophysis, although only occasionally.

There are two hormones that are secreted by the posterior pituitary – Anti-Diuretic hormone (ADH), and Oxytocin.

Produced by Supraoptic Vasopressinergic neurons, the hormone is stimulated by raised osmolarity and low blood volume while suppressed by reduced osmolarity. The hormone helps in increasing the permeability of the collecting ducts that are present in the kidneys, thereby leading to re-absorption of water.

Produced by Paraventricular oxytocinergic neurons, the hormone is stimulated by the stretch receptors in the cervix or the nipple and oestrogen while suppressed by stress. It leads to the smooth muscle contraction of the uterus that ultimately results in giving birth or the mammary glands that leads to milk ejection after the delivery of a child.

It secretes the hormone known as Oxytocin that increases the level of ADH (antidiuretic hormone) and uterine contractions. It is the antidiuretic hormone that leads to an increase in the reabsorption of water by the kidney tubules. Reduced ADH production leads to Diabetes insipidus characterized by the inability to concentrate urine. This consequently results in excess urination, potentially causing dehydration. The neurohypophysis, thus, helps in maintaining urine concentration and balance of water in the body.

The neurohypophysis is associated with disorders like Diabetes insipidus in which the body loses the capability to concentrate urine.

The ADH enables the kidneys to hold on to an adequate amount of water. The requirement of ADH, if not fulfilled, leads to the excessive loss of water from the body through urination. As a result, dehydration is caused that may reach a dangerous level with a high sodium level and enhanced thirst. This condition is referred to as Diabetes Insipidus or DI. On the other hand, when the ADH conserves more than enough water in the body, it lowers the sodium levels casing Syndrome of Inappropriate Antidiuretic Hormone Secretion or SIADH.

SIDH is caused in people who have suffered from heart failures or brain injuries, which affect the hypothalamus. The hypothalamus is the part of the brain that acts collectively with the pituitary gland to secrete or produce the hormone.

To identify the condition, patients may be asked to go for a blood test and urine examination. Through this, the levels of sodium and potassium in the body could be identified along with the amount of substance that is dissolved in the urine or blood, the process of which is called osmolality.

The condition arises when the water requirement for the body is not fulfilled. It is also referred to as water diabetes.

Check out these images to know how this endocrine structure looks like. 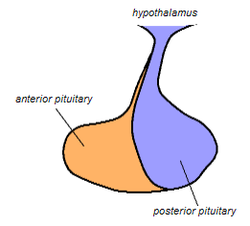 One Response to Posterior Pituitary