By Anirudh Agarwal on September 1, 2017 in Male Reproductive System

The Vas Deference or Ductus deferens is a thin, fibromuscular tube initiating from the epididymis and converting into the ejaculatory duct in the male reproductive system. Being 30-45cm long and less than 5mm in diameter, it serves in transporting sperm cells from each of the testis to the common ejaculatory duct.

The tube is a highly convoluted structure while extending from the globus minor, which straightens up as it ascends medial to the epididymis and joins other juxtaposed structures of the spermatic cord while extending into the inguinal canal. In the pelvic space, the ductus deferens is seen passing anterior to the pelvic bone, turning at right angles over the pelvic brim nearing the urinary bladder. Running superior to the ureters, it then ascends along the posterior side of the bladder towards the prostate gland, where the ductus deferens expands fairly forming an ampulla before it narrows again and joins the seminal vesicles to form the large, ejaculatory duct. Each duct has an artery branching from the superior vesicle artery, converting into the venous drainage to the pelvic venous plexus. Lymphatic drainage goes towards both external and internal iliac nodes. Its innervation arises from the pelvic plexus and is sympathetic in nature. 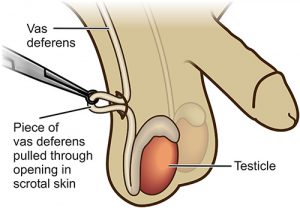 The vas deferens is made up of 3 layers:

The middle layer is made up of smooth muscle fibers from the outside and circular muscles from the inside, making the middle layer thicker than the diameter of the lumen. The proximal part of the duct further differentiates these two layers into outer and inner layers made up of longitudinal smooth muscles and another middle layer consisting of the circular muscle fibers.  Reaching towards the inguinal canal the innermost layer of longitudinal muscle fibers get eliminated. This 1.5m thick muscular layer is lined with the mucous layer, made up of pseudostratified columnar epithelial cells, having anterior stereocilia that help the sperm cells to move smoothly throughout the tube; providing a protective covering to the lumen. The diameter of the lumen is 2.5mm.

The Vas Deferens is a 30cm long tube whose main function is to transport sperms that are mature and which reside in the epididymis, towards the urethra, when the body is ready for ejaculation. The sperm is pushed to the urethra by peristaltic motion. Through its way out, sperm mixes with secretions of the bulbourethral gland and the prostate gland, and also that of the seminal vesicles. 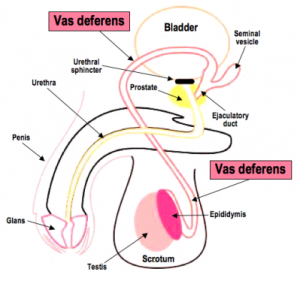 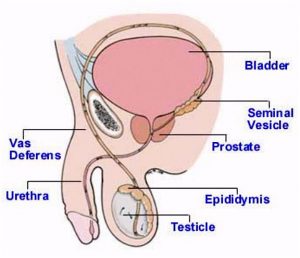 As vas deferens is the duct responsible for transmission of sperm cells to the ejaculatory system of the male reproductive system, severe medical conditions can lead to complete sterility of the individual.

The most common vas deferens issue is the Congenital Absence of Vas Deferens.  Being a genetic disorder, this medical condition is prevalent from the child’s birth. The individual’s reproductive system is capable of producing active sperm cells but, unable to push the sperm towards the ejaculatory duct, making the semen sperm less. Reproduction is only possible through collecting the sperm through surgery and in vitro fertility processes.

Azoospermia is the complete absence of sperm in semen, which happens as a result of a blockage or obstruction present in the vas deferens which might have resulted as a post-surgical effect, as a result of a repairing hernia, etc. Surgical treatment for this problem is possible with the recovery of up to 65%.

Causes for Blockage of Vas Deferens

Symptoms of Blockage of Vas Deferens

It is the clinical condition of infective and sometimes inflammative symptoms of the epididymis, caused by bacterial pathogens like Mycobacterium tuberculosis (TB). It occurs mostly in men between the ages of 20-39. In children, it can be caused due to infective traumatic injury. However, in some rare conditions, it can occur due to child abuse.