By Anirudh Agarwal on August 26, 2017 in Skeletal System

What is the Sphenoid Bone?

The sphenoid bone, also known as Os sphenoidale, is a cranial bone, shaped like a butterfly or a wasp, which occupies most of the middle part of the skull’s base, making up the middle region of the cranial fossa. Crammed between a group of bones in the frontal part of the cranium, it becomes one of the 8 bones that form the cranium. The sphenoid bone primarily consists of a central body (containing the pituitary gland) and two pairs of wing-shaped extensions projecting laterally. Forming the sides and floor for eye orbits, it keeps the eyes intact.

Where is the Sphenoid Bone located?

The sphenoid bone makes the floor of the skull, present in front of the temporal bones and making the base of the occipital bone. It is segregated into a middle part called the body, a pair of great wings and a pair of lesser wings. 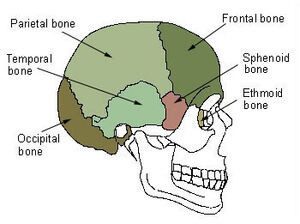 What is the Gross Anatomical Structure of the Sphenoid Bone?

Being the most complex structured bone of the human skeleton, it is divided into the following regions:

The sphenoid bone mainly plays a key role in the development of important anatomical structures and also, in the formation of the skull. Other functions are: 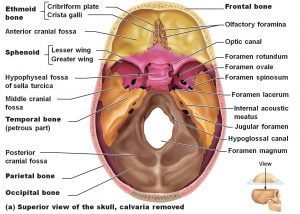 What is Transsphenoidal Surgery?

The sphenoidal bone gains its significance as it encases the pituitary gland, also known as the master endocrine gland, within it. Hence, it becomes easily possible to access the pituitary gland during surgery by the passage of the sphenoid bone and its sinuses. When an instrument is passed as described above, for treatment of various pituitary anomalies and adenomas, the surgical process is known as endoscopic trans-sphenoidal surgery or ETSS. This does the needful without going into a detailed craniotomy.