By Anirudh Agarwal on September 3, 2017 in Skeletal System

Endosteum is a thin, soft, connective tissue, lining the cavity of long bones like Humerus and Femur. It acts as a coating for the inner compact bone and the trabeculae of the spongy tissue. The osteoprogenitor cells of the preosteoblasts present in this connective tissue lining, differentiate into osteoblasts and later on to osteocytes, which are the bone forming cells. They also aid in the formation of bone-matrix secreting cells, also known as bone-lining cells. The endosteum, along with the periosteum functions for the growth of bone in diameter. Endosteum also contains Haematopoietic Stem Cells or HSCs which are totipotent in nature and play a role in the production of all types of blood cells.

Where is the Endosteum located?

The endosteum can be seen in the T.S. of any long bone. This layer of membrane envelopes the spongy tissue, the medullary cavity and the internal lining of the bone’s cavity and the Haversian canal of the marrow. Endosteum is located in bones such as femur, humerus, hip bone, thoracic rib bones and sesamoid bones like patella. It is also seen lining many walls of different sinuses of the skull. 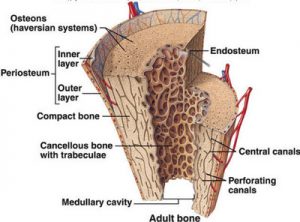 What are the different types of endosteum?

Depending on the inner bone area where it is found, mainly 3 types of endosteum are known:

What is the clinical importance of endosteum?

Exchange of factors such as blood cells and calcium between bone marrow and blood vessels takes place through the osteoblasts of the endosteum called the Endosteal Cells. These cells are active participants in bone growth, repair, and remodeling. Endosteum and periosteum together contribute to bone repair and reconstruction after a fracture. The cells of both the layers are capable of undergoing rapid mitosis and proliferation after which, they migrated towards the site of bone injury.

In certain cases, medullary lesions can be observed along the inner aspect of the cortical bone, leading to endosteal scalloping which may come up to be associated with both benign as well as malignant forms of tumors. These can also lead to skeletal metastasis in acute stages.

What are the Functions of Endosteum?

Endosteum has several important functions in the body, as it forms a part of the long bones of the human body. Some of its major functions are as follows.

During a traumatic injury or a fracture, the occurrence of a hematoma within the bone causes rapid multiplication of the endosteal cells to reestablish a bridge of reparatory callus and aid in bone solidification.

The endosteum stimulates bone resorption at the inner surface of the bone along with periosteum that stimulates the continuous formation of new bone from the outside. This leads to increase in the diameter of both, medullary canal as well as the bone as a whole. 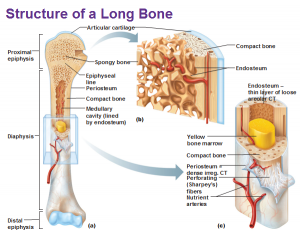 What is the difference between endosteum and periosteum?

There are a number of differences between the two linings, endosteum, and periosteum. Some of them are listed below: