By Anirudh Agarwal on January 16, 2018 in Skeletal System

The humerus is the long bone located in the upper arm of the body which extends from the shoulder joint to the elbow. The word “humerus’’ literally means upper arm and is the only bone in the upper arm.

Location of the Humerus Bone 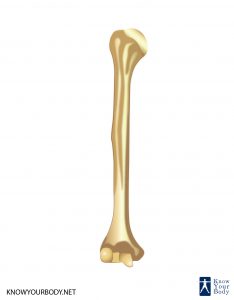 Structure of the Humerus Bone

Anatomy of the Humerus Bone

The upper portion of the humerus has a round head, a thin neck, and two tubercles. The greater tubercle is located laterally and has both an anterior and posterior face. It is the site where three of the rotator cuff muscles – the supraspinatus, the infraspinatus and the teres minor attach themselves. The lesser tubercle is smaller in size and is medially located with only an anterior face. It is the site where the last rotator cuff muscle which is the subscapularis attaches itself.
There is a deep groove called the intertubercular sulcus which separates both the tubercles. The edges of this groove are called lips. The tendons and muscles of the pectoralis major, the teres major and the latissimus dorsi are attached to the lips of the groove.

The lower portion has two epicondyles, the trochlea process, the capitulum process, the radial fossa, the coronoid fossa and the olecranon fossa.
The medial and lateral supraepicondyles are both palpated at the elbow. The trochlea process is located medially and extends onto the posterior portion of the bone. The capitulum is lateral to the trochlea and articulates with the radius bone. The three fossae are three depressions which accommodate the bones of the forearm when it is being moved.

Innervation of the Humerus Bone

The axillary nerve is situated on the proximal side of the bone. If the shoulder joint gets dislocated, this nerve could get affected and this could lead to a loss of regular shoulder contour.
The radial nerve extends from the back side to the front part of the bone in the spiral groove. If the humerus gets fractured in this section, it will lead to an injury to the radial nerve.
The ulnar nerve is in the distal region of the bone. If the elbow is struck or gets hit lightly, it can result in a tingle like sensation and a bit of pain. This nerve is in the front of the medial epicondyle and gets easily damaged during any elbow injuries.

Blood Supply to the Humerus Bone

The main vascular supply to the humerus comes from the anterolateral branch of the anterior humeral circumflex artery. This passes laterally to the biceps and forms the arcuate artery which enters the head of the humerus in the intertubercular groove and branches out into multiple tuberosities.

Functions of the Humerus Bone

The main function of the humerus bone is that it serves as the site for muscular attachment which is then responsible for different movements, especially of the shoulder and elbow joint. The deltoid is inserted on the deltoid tuberosity and is involved in the adduction and extension of the shoulder joint. The pectoralis major, the teres major and the latissimus dorsi are attached to the lips of the intertubercular groove and works to adduct and rotate the humerus internally. The humerus is mainly involved in supporting the movements of the arm from lifting objects to other physical activities.
Apart from providing support to the major muscles of the shoulder, the upper and the lower arms, it also acts as an anchor to the axillary nerve, the radial nerve, and the ulnar nerve. 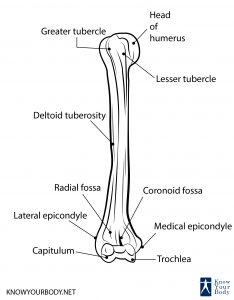 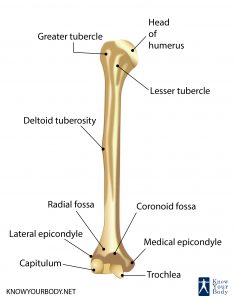 Fracture of the Humerus

The humerus can receive a fracture on many locations on the bone. The fracture can happen near the shoulder, the shaft or near the elbow. These fractures often occur after a heavy fall, physical stress, trauma or some pathological condition. Falls are the most common cause of humerus fractures.
Symptoms include pain, swelling and skin discoloration at the site of the fracture. The nerve fibers of the arm may be affected which will affect the nerve functions and the blood supply to the area. Proximal and distal fractures can also cause certain deformities and can shorten the length of the arm in the case of a displaced fracture. This often requires a surgery after which, normal healing takes place. If the fracture is nondisplaced, the humerus heals within a few weeks with rest. Immobilization followed by placing the arm in a sling or using a supportive brace will help the fracture heal soon. Rest during this period is of the utmost importance.

1. Why is the humerus called the funny bone?

When the ulnar nerve strikes against a surface, a tingling sensation is created in the body. Due to this sensation and due to the fact that the word humerus is a homophone of the word humorous, it is called the funny bone.

2. What are the reasons for pain in the humerus apart from a fracture?

The reasons for humerus pain apart from a fracture can be muscle pains, growing pains, and osteomyelitis.

3. What could lead to the misdiagnosis of humerus pain?

Sometimes due to diabetes and vitamin deficiencies, there could be a possible misdiagnosis for various conditions.

4. Are older people at the risk of humerus fractures?

Yes, due to osteoporosis, where the bones become weak and brittle, the humerus may shatter easily.

5. Is the humerus bone a common site for cancer?

After the femur and the tibia, the humerus bone is the most common location for bone cancer. Different forms of cancerous growths can arise which may require treatment.

The humerus is the bone that extends from the shoulder joint to the elbow joint. It is mainly a site for many muscular attachments and provides the support required for the movements of the muscles of the arms, whether it is for lifting objects or for placing them. Fractures of the humerus are many and are diagnosed and treated according to the location of the fracture and the intensity of the fracture. Displaced fractures require surgery and take a longer time to heal whereas non-displaced fractures heal faster and may not require surgery.