By Anirudh Agarwal on September 15, 2017 in Skeletal System

The hyoid bone is the only bone in the human body which is not connected to another, is shaped like a horseshoe, which remains hanging in the neck muscles. It’s historical importance traces back to the Neanderthals and Homo sapiens for the origin of speech. Unlike in other mammals, the human hyoid bone works together with the tongue and the larynx to produce effective speech as it is responsible for the movement of many small muscles while protecting the esophagus and also allow the action of swallowing to take place.

The hyoid bone is located on top of the thyroid cartilage, lower to the chin in the basal region of the lower jaw called the mandible. It can be found lying anteriorly to the trachea in the mid-neck region. There cannot be seen any significant joint formation or articulation. 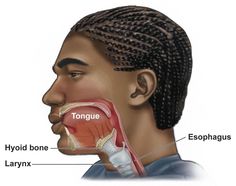 Anatomy Of The Hyoid Bone

The structure of the hyoid bone is divided into the following parts:

Body – The region occupying the center of the bone is known as its body. The body works as a base for the extension of the bone and also serves as an anchor to some important neck muscles.

Greater Cornua – These pair of cornua or horns, conical in shape, project towards the back from each end of the center, that is, the body. They are superior and more lateral in orientation than the lesser cornua. They help attachment or important muscles like the thyrohyoid muscles and the stylohyoid muscles.

Lesser Cornua – These are a pair of smaller conical protrusions oriented more in the upwards direction originating from the base of the greater conuas. The attachment of lesser horns with the body takes place with the help of fibrous tissues. A ligament known as the stylohyoid ligament adheres itself to the apical end of the lesser horns.

Being the only bone not supported with any articulation, the hyoid bone stays intact in its place by being attached to a number of muscles and ligaments.

1. Muscular Attachments: The hyoid bone acts as a base for anchorage of many muscles of the larynx, pharynx, floor of the mouth and epiglottis while protecting them. These muscles can be categorized as under.

a. Muscles of the oral cavity and pharynx

2. Ligaments: The following ligaments are found to be associated with the hyoid bone and their function is to help the hyoid bone to stay in its place.

Various branches arising from the external carotid artery, lingual artery and mainly an important branch of superior thyroid artery known as the infrahyoid branch, are responsible for the vascular supply of this region.

Functions Of The Hyoid Bone 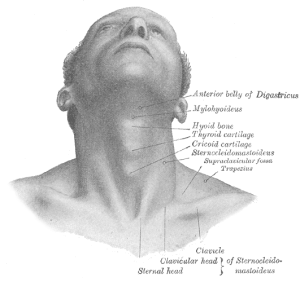 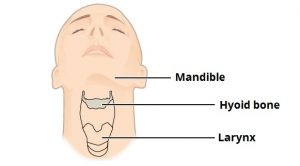 The fracturing of the hyoid bone is generally associated with activities such as strangulation example, during performing martial arts. Other cases may include cervical trauma, induced vomiting, gunshot, hyperextension, motor accidents, etc. Fracture in the hyoid bone is a rarely found condition which owes its rarity to the protection the mandible provides to the bone. In case, hyperextension is issued in the neck region, the hyoid bone is at a greater risk of blunt trauma, as it is more exposed. The muscles and the ligaments that hold the hyoid bone suspended are also tensed in such situations, the mobility of hyoid bone is drastically decreased, which, in turn, decreases its ability to bear force further.

Age plays another factor in protective mobility. The most prevalent age bracket is between 15-55 years with an average of 35 years. It can be found lesser in females than in men. This may be due to a fusion of the cartilaginous part of the bone with the tougher part of it over the years.

The patient may suffer from ventral neck pain, difficulty in swallowing, neck extension and palpation. Hoarseness in the voice along with Dyspnea and stridor may be common symptoms.

Diagnosis is generally made by radiography, laryngoscopy, CT Scan, nasendoscopy or direct surgical findings. If the fracture involves laryngeal lacerations, complications such as hemoptysis, oedema, and dyspnea may be seen.

Typical treatment does not require reduction of the fracture. A liquid diet may be continued till the asymptomatic condition is reached. In extreme cases, a food tube is inserted. The fracture increases the risk of oedema as well as infection. The fracture can heal within 6 weeks if proper care is taken.