By Shoummojit Roy on July 14, 2012 in Respiratory System

It is the terminal section of the nonrespiratory conducting airway. This bronchiole gets subdivided into respiratory bronchioles. The Terminal bronchioles are referred to as the last of the purely conductive airway generations in the human lungs.

It is located at the terminus of the conducting zone. It has a diameter that approximately ranges between 0.5 to 1 mm.

It supplies oxygen to each pulmonary acini in the body. The main function of these tubular structures is conduction of gas and they are too thick to allow the exchange of air.

It is the most distal portion of the conducting zone that branches off the lesser bronchioles. Every single terminal bronchiole gets divided to form respiratory bronchioles that comprise a small number of alveoli. A simple cuboidal epithelium lines up the structure. This epithelium contains club cells, which are rounded and non-ciliated cells that secrete non-sticky protein.

The secretion is known as a surfactant and it helps in the maintenance of the airway in the tiniest bronchioles that take part in the process of respiration. The secretion also enables the reduction of the surface tension that allows bronchioles to expand while inspiration, thereby restricting the collapse of the same during expiration.

It occurs when the smooth muscular tissues of bronchioles constrict severely, thereby causing contraction of their diameter. It is treated by oxygen therapy as well as bronchodilators, including albuterol.

Check out these useful images to know how these bronchioles look like. 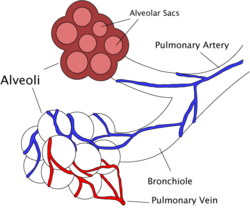