By Amit shah on February 18, 2015 in Circulatory System

It is a one-sided vessel which arises in the thorax to the right part of the vertebral column, delivering deoxygenated blood from the posterior abdominal and chest walls. It is an essential part of the azygos venous system.

This vein develops in the thorax at the level of T12 (thoracic vertebra). It originates from lateral, medial and intermediate roots or from the combination of any three.

It is located on the right side of the thoracic vertebral column. The azygos vein system can be configured differently for different individuals. In rare cases, the vein system supports separate areas of the abdomen. 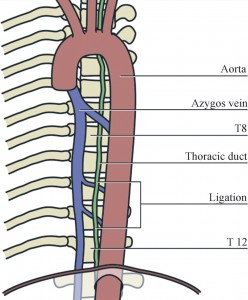 The composition of this blood vessel can be inconsistent. In few cases, it drains thoracic veins, gonadal and bronchial veins. Lack of such a symmetrical vein on the other side of the body has led to its name ‘Azygos.’

Azygos is derived from a Greek word where zyg means ‘pair’ and A means ‘not.’ Thus, it states its characteristics as unpaired. The vein, unlike the others, is not paired and is typically found on the right side of the body.

It links the superior venae cavae with the inferior venae cavae either by conjoining the IVC or by the hemiazygos veins. It drains blood from the walls of the abdomen and thorax and also corresponds to the vertebral venous plexuses. It also receives blood from bronchial, mediastinal and oesophageal veins.

It constitutes an essential part of the normal cardiomediastinal curve on chest x-rays and usually measures less than 7 mm.

The unusual tributaries of this vein include the superior phrenic, gonadal veins, internal thoracic and bronchial veins

Litigation of this vein is compulsory and is regarded as one of the initial steps during the primary repair of Trach Eoesophageal Fistula (TEF) with Esophageal Atresia (EA). Congenital TEF with EA is frequent occurring disorder in newborns.

Along with humans, dogs and cats lack paired azygos. However, sheep and cows and other ruminants have paired Azygos. 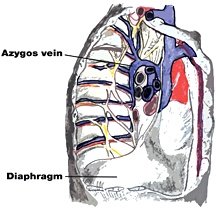 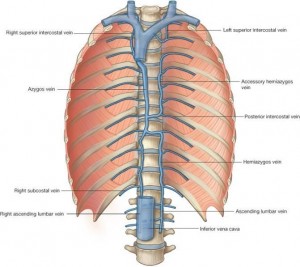 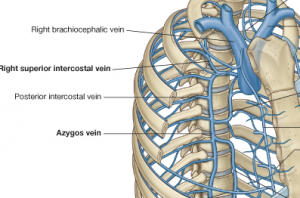