It refers to a band of tough fibrous tissues which attach part of the liver to the abdominal and diaphragm wall. This sickle-shaped ligament is a remnant of the ventral mesentery of the fetus.

The base of the Falciform Ligament goes down to the backwards and downwards, while its apex directed backward and upward. The Falciform ligament looks downward from the helium of the liver.

It is located on the left side of the midline of the abdomen and passes the anterior wall of the diaphragm and abdomen. 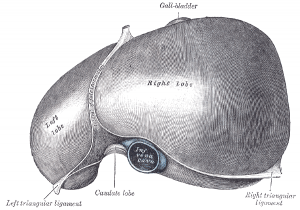 The Falciform Ligament lies obliquely from the front part of the abdomen to the back. One side of the Falciform Ligament runs behind the diaphragm and the rectus abdominis muscle to touch the peritoneum. The other surface of the sickle-shaped ligament comes in contact with the left lobe of the human liver.

It consists of two layers of peritoneum that are bonded together side by side. The free edge or base is composed of different layers of the round ligament along with several paraumbilical veins.

The ligament runs from the base of the diaphragm to the end surface of the sheath that lies on the right rectus abdominis muscle, down the umbilicus and stretches from the anterior margin of the human liver to the posterior surface.

The primary function of this ligament is to hold the liver in position. It is one of the anatomical structures which link to the rectus and diaphragm wall and prevents the liver from falling out of place.

The liver held in position by the falciform has many functions. The most notable ones include synthesis of the proteins, detoxification of diverse metabolites, production of inevitable substances that are required for digestion, etc. This digestive gland is responsible for producing bile, which is an alkaline compound used for digesting foods.

Hence, it can be said that if the Falciform Ligament does not hold the liver in position, the major functions of the body would fail.

This anatomical structure can be influenced by certain medical conditions like portal hypertension that includes high blood pressure in the portal vein. On account of the increased blood pressure in the portal vein, the Falciform Ligament looks for an exit for the blood, resulting in bruising near the belly area. This unsuitable route for the blood may lead to additional complications in the body.

In many cases, the reason for Portal Hypertension is not known. However, the other cause includes blood clots developed in the portal vein that helps to carry blood from your liver to the heart. Another major cause is a type of parasitic infection that is known as schistosomiasis. Focal nodular hyperplasia is another major cause of portal hypertension.

The doctor performs a physical examination of the anus or the abdomen that aids in the diagnosis of portal hypertension. The disease is detected on the basis of varices or dilated veins or ascites. Various other tests, such as X-ray tests, laboratory tests and endoscopic exams are carried out to diagnose the disease.

There are various treatment options available for curing Portal Hypertension. They include medications, diet, surgery, endoscopic therapy, radiology procedures and surgery. The type of treatment chosen by the doctor depends upon the severity of the symptoms and the liver functioning of the patient.

The types of treatments include:

Distal splenorenal shunt– The procedure includes connecting your vein from the spleen and then to the left kidney. This is to help reduce pressure in the varices and also control bleeding.

Transjugular intrahepatic portosystemic shunt– The doctor puts a stent right in the centre of your liver, connecting the hepatic vein with your portal vein. This helps reroutes blood to your liver, thus reducing pressure unnecessary pressure in the abnormal veins.

Liver transplant- When a person is suffering from end-stage liver cancer, transplant is the only option.

Paracentesis– In this process, the accumulation of fluid in the abdomen is removed. However, the procedure needs to be repeated and the patient has to undergo several visits to the clinic.

How falciform ligament helps in the diagnosis of pneumoperitoneum?

This ligament of the liver plays a pivotal central role in determining pneumoperitoneum in patients. Pneumoperitoneum is a medical condition in which air or gas enters the abdominal cavity and causes complications. This band of tough fibrous tissues often shows symptoms of warping, bulging or displacement if a person is suffering from Pneumoperitoneum.

In rare cases, a cyst develops on the ligament that leads to extreme pain in the upper abdomen. The most common form of treatment for such cysts is surgery since they do not respond to other forms of management. 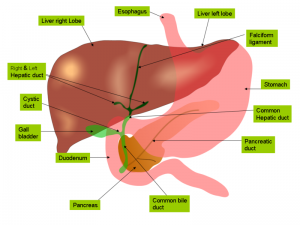 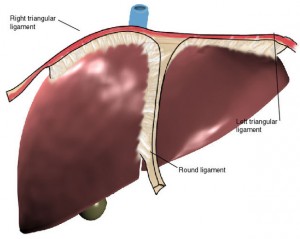