By Shoummojit Roy on September 8, 2012 in Male Reproductive System

It refers to a spongy tissue mass located in the penis. It is made of erectile tissue and is also surrounded by Tunica albuginea. More than one of these types of tissue mass is known as Corpora spongiosa.

Sometimes, it is also called “Corpus cavernosum urethrae” which is actually considered to be an old term for the structure. It is also known by various other names like:

The structure is located in the bottom section of the penis, in the furrow between the Corpora cavernosa.

It enwraps the urethra and protects it from being squeezed and closed when the penis is in an erect position. In the absence of this tissue, the urethra would pinch itself shut during male erection. This would make the smooth passage of semen impossible through the penis at the time of ejaculation.

During an erection, the Corpus spongiosum and Corpus cavernosum get filled with blood and continue to get enlarged until the shaft becomes hard and stiff.

Damage to this structure may result in difficulties in having an erection or reduce sensations during sex. The Corpus spongiosum can suffer damage due to a condition called Priapism in which an erection is prolonged, persistent and painful. It may also arise due to an injury to the penis.

This leads to a bent penis, which occurs from either the formation of an internal scar or the formation of fibrous plaque. The scar or plaque is present on the two of the main erectile chambers of the corpus cavernosum.

The symptoms of the condition are listed below:

Know how this tissue looks like with the aid of these useful images. 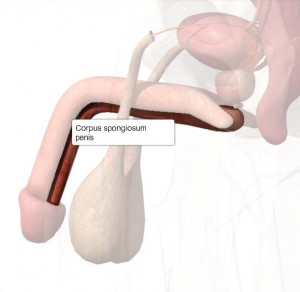 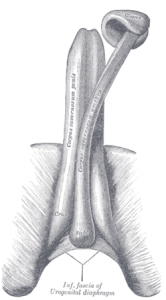 One Response to Corpus spongiosum