Cranial Cavity or the Intracranial Cavity refers to the gap or space formed inside the skull. There are several organs in the Cranial cavity, including the brain, which is lined by melinges, containing cerebrospinal fluids, to cushion blows.

The Cranial Cavity is located inside the skull.

The Cranial Cavity anatomy contains a total of eight cranial bones, that are blended together to form this area. The pituitary gland is also found in this cavity. The gland secretes different fluids that are important for the functioning of the different parts of the body. The body’s temperature is regulated by this gland, along with other functions like physical growth and sexual functions. This gland controls the thyroid gland. The capacity of the cranial cavity is 1200-1700 cm3.

There are twelve Cranial nerves in the Cranial Cavity. These nerves are responsible for providing necessary sensory information for things such as taste, smell, hearing, and sight. The ability of chewing and sleeping are also aided by the Cranial Cavity.

1) The brain (including the frontal, occipital, ethmoid and sphenoid bones and also the two temporal and parietal bones).

As there are a number of structures in the Cranial Cavity, a traumatic injury to the head can potentially cause major damage to the brain. This is why it is recommended to get medical attention following a head injury. a moderate injury may cause a few negative effects, if any, while a severe injury to the contents of the cavity may have catastrophic results, including death.

The Cranial Cavity also houses the meninges, among other important organs. These membranes surround the central nervous system. If an infection develops, it may lead to a potentially fatal disease called meningitis. 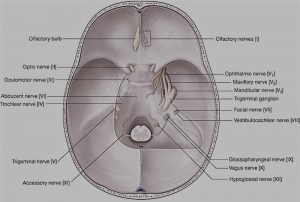