As we take a breath, the air passes through the nose or mouth to the trachea. Then, it enters the main bronchus. As each bronchus keeps dividing, before becoming the bronchioles, these continue the task of fanning out till it reaches the respiratory system.

The different types of Bronchioles are:-

The main function of the bronchioles is to conduct air from the bronchi to the alveoli, and also to control the distribution of air throughout the lung by constricting and dilating. The terminal and lobular bronchioles are called the dead space, that means there is no exchange of air in these vessels. 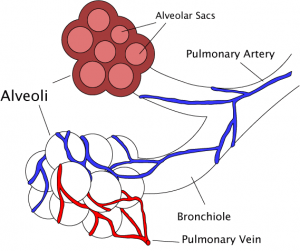 It is a very small branch of air tubes inside the lungs, which happens to be a continuation of the bronchus.

The diameter of the bronchioles is said to be below 1 mm, though the size can vary from 5 mm to 0.3 mm.

Structure Of The Bronchioles

Each lung has a primary Bronchi, the left, and right Bronchus. These give rise to the secondary bronchi., which in turn gives rise to the tertiary bronchi. The tertiary bronchi divide into bronchioles. These are different from the tertiary bronchi, where their walls do not have hyaline cartilage ( a cartilage that is transparent) and have club cells ( dome-shaped cells found in the bronchioles of the lungs)  in their epithelial lining. The epithelium changes from a simple ciliated columnar epithelium to a simple ciliated cuboidal epithelium, as the bronchioles keep decreasing in size. These bronchioles rely on elastic fibers, instead of a hyaline cartilage in order to maintain their patency. The inner lining of the bronchioles is thin, and has no gland, being surrounded by a smooth muscle. The bronchioles keep getting smaller as they divide into terminal bronchioles, marking the end of the conducting zone. Alveoli become present only when the conducting zone changes into the respiratory zone.

The terminal Bronchiole is the farthest segment of the conducting zone, branching off the lesser bronchioles. Both the terminal bronchiole divide to form the respiratory bronchioles, containing a small number of alveoli. These bronchioles contain a limited amount of ciliated cells and no goblet cells.

Bronchoconstriction, narrowing of the bronchioles may occur due to inhalation of toxic fumes, allergic agents, cold air and other irritants. By this, the body keeps the irritants in check. On the other hand, Bronchodilation is the process of the widening of the bronchioles. Adrenaline (the hormone that is released to counter stress) serves to dilate these passageways. 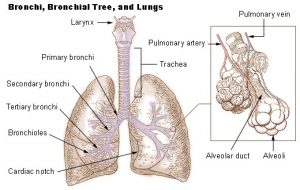 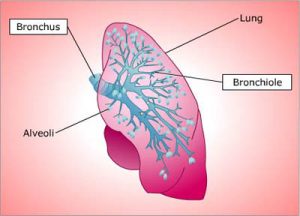