By Shoummojit Roy on August 7, 2012 in Muscular System

It is a thin, quadrilateral muscle that is attached closely to superficial fascia. It has got no bony attachments. It is sometimes considered to be a part of the occipitofrontalis muscle.

It is located at the front of the head.

It originates at the galea aponeurotica, a fibrous layer covering the upper part of the cranium’s and running from forehead to the skull’s back. The frontalis muscle arises at the anterior region of the galea aponeurotica that lies close to the top of the forehead and goes downwards and adheres to the eyebrows and upper nasal region. Terminal region of the frontalis muscle interdigitates with eyebrow and nasal muscles that includes procerus and orbicularis oculi muscles.

The muscle is broader than the Occipitalis. Its fibers are longer and have a paler colour. Its medial fibers are continuous with the medial fibers of Procerus. Its immediate fibers blend with Orbicularis oculi and Corrugator and are attached to the skin of eyebrows. Its lateral fibers are blended with the latter muscle over the zygomatic process of frontal bone. The fibers of the muscle are directed upwards in the spot where they join galea aponeurotica below coronal suture. Frontal muscles receive blood from supraorbital branch arising from the ophthalmic artery.

Originating from the forehead and running until eyebrows, the frontalis muscle is responsible for facial movements. Its primary function is to help an individual lift his or her eyebrows up, especially when a person is looking up. It also helps an individual adjust his or her vision when the view is too dim or distant.

Innervation is a process in which a muscle contract or relax and cause movement upon receiving electrical impulses from the brain through nerves that run across the body. Each muscle has a particular innervating nerve. Likewise, the nerve innervating frontalis muscle is called facial nerve VII or cranial nerve VII.

Frontalis Muscle Pain is characterized by an aching sensation across the forehead region which might cause straining of eyes.

Frontalis muscle pain and symptoms could contribute to or be similar or affected by the following medical conditions:

The frontalis muscle is the easiest and probably one of the most accessible muscles for massage in our human body. When a person is experiencing a headache in the forehead region or tightness in the forehead, then massaging from the top of the eyebrow to straight up until the hairline aids in stretching and relaxing the muscles and alleviating pain.

Here are some images that show the location of this muscle. 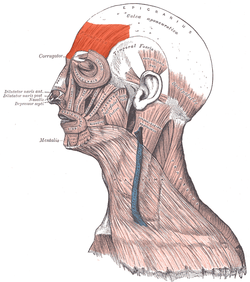 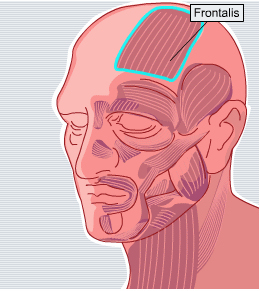