By Shoummojit Roy on August 10, 2012 in Skeletal System

What is Vertebra prominens?

It is the name given to the 7th cervical vertebra in the human body.

The word “vertebra” is derived from the old Latin word “verto” meaning a “Joint”. It can also refer to something that is to be turned. In A.D. 30, this word was used by Celsus to describe any joint. It was only much later that the word was used to describe the bone.

It is located on the upper part of the spinal cord.

It is the prominently long spinous process that is easily apparent from the skin surface. The spinous process is almost horizontal in direction, thick, not bifurcated and ending in a tubercle with which the lower portion of ligamentum nuchae is connected.

Transverse processes generally have a considerable size. The posterior roots of these processes are quite large and prominent and the anterior portions are small. The upper area of the traverse processes usually has a shallow sulcus for 8th spinal nerve. Its extremity hardly presents any more than a hint of bifurcation.

A total of five cartilaginous centers grow as anlage to all the ribs and vertebrae. The body is formed by one center, the costal elements are formed by two anterolateral centers and the vertebral arch is formed by two posterolateral centers. During the 3rd intrauterine month, the body anlage in this vertebra starts to ossify. At this point, the ossification points for the arch anlagen and costal appear as well as a merge to form paired lateral centers. The 3 ossifying centers stay separated at birth. The 2 laminae unite during 2nd year. However, they do not join the body as long as individuals are 3 to 6 years old. The fusion generally starts cranially and then progresses caudally.

The secondary centers start appearing on tips of spinous and transverse processes as well as on the superior and inferior surfaces of bodies. They begin to arise during mid-teen years and then fuse during mid-twenties.

The main function of this vertebra, along with the other vertebrae of the cervical spine, is to provide support to the skull – allowing back and forth as well as side to side head movements. It also protects the spinal cord from injuries.

As already stated above, the vertebra prominens or C7 shows a specific spinous process that is palpable from the surface of the skin. It is the seventh cervical vertebra and it has a unique feature that distinguishes it from other vertebrae, which is an abnormal extra rib that is called a cervical rib. This rib originates from the anterior root of the transverse process.

These ribs are small in size but capable enough of compressing blood vessels, including subclavian vein or subclavian artery, etc. This compression, as a result, leads to severe pain, numbness, weakness, and tingling sensation in the upper limb. This condition is known as thoracic outlet syndrome.

Here are some images showing the structure of this vertebra. 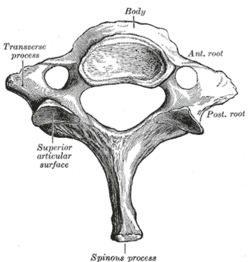 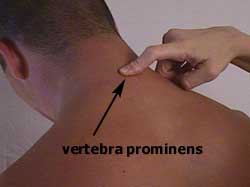