By Anirudh Agarwal on December 27, 2013 in Muscular System

It is basically a compound muscle comprising of the iliacus and the psoas major. These distinct muscles are typically denoted as “iliopsoas” with reference to the dorsal or inner aspect of the hip joint. However, it does not include the psoas minor.

The lateral regions of the vertebral bodies of T12 and L1-L-5 as well as the intervertebral discs give rise to the psoas major. The iliacus evolves from the iliac fossa situated on the internal surface of the ilium.

It is present in the lower abdomen but goes up to the upper inner thigh. 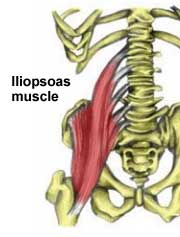 These inner hip muscles belong to the hip flexors, a group of skeletal muscles that helps the femur to flex. In fact, it is stronger than the other femur muscles. At the level of the inguinal ligament, the psoas major joins the iliacus and traverses the hip joint to insert the lesser trochanter of the femur. The muscle is lined with iliopsoas fascia, which surrounds the psoas major muscle as it passes below the medial arcuate ligament. The dorsal hip muscle then combines with the iliac fascia to continue as the inguinal ligament. It eventually forms the iliopectineal arch that acts as a partition between the muscular and vascular lacunae.

At the levels of L1 and L2, the branches off the lumbar plexus directly supply the psoas major. On the other hand, the femoral nerve is responsible for innervating the iliacus.

The compound muscle controls the various actions of postural changes such as walking, running, sitting, or standing. It keeps the upper body straight while one is performing certain types of exercises in the supine position. The muscle not only aids in lateral rotation of the thigh but even flexes the lumbar vertebrae column to the right or left. According to medical experts, it is highly functional as a posture muscle since the slow-twitch red type 1 fibers modulate these deep hip muscles. In all likelihood, it helps in the stabilization of the pelvis.

Lack of movement due to irregular physical activity can permanently shorten the muscle and lead to spasticity. It is highly necessary to stretch the thigh on a regular basis in order to avoid a low muscle tone. A contracture deformity is quite risky as it may manifest into hip extension, lumbar lordosis, and anterior pelvic tilt. Bacterial or viral infections can sometimes lead to accumulation of pus in the muscle and cause an abscess. Percutaneous drainage is given to the sufferers as a part of initial treatment modality. Acute traumatic injuries and overuse of the hip and pelvis can give rise to tendonitis, also known as snapping hip syndrome, in which the iliacus and the psoas major tendons get strained and undergo severe inflammation. For the same reason, the iliopsoas bursa lying between the hip joint and the flexor muscle may become inflamed, causing bursitis. MRI or CT scan of the pelvis can spot tendinopathy as well as a swollen bursa. Affected patients suffer from pain, weakness, and tenderness that radiates deep in the groin region. It is, however, possible to release contractions in the muscle by performing some stretching exercises. Severe discomfort in the pelvis region may receive corticosteroid injections to reduce the swelling. Chronically contracted muscle can be corrected and extended with the help of tenotomy, a complicated surgical procedure which involves division of tendon.

In some cases, individuals suffering from bleeding disorders like hemophilia and Von Willebrand disease can develop hematomas or hemorrhage. During a physical test, health professionals can detect the problem with the aid of psoas sign, which indicates irritation to this particular group of hip flexors in the abdomen. Iliopsoas impingement is one of the main causes of labral tears. Spasms in this area can contribute to lower back pain. 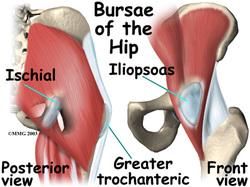 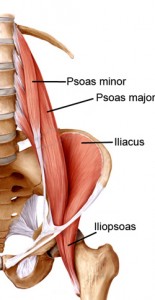